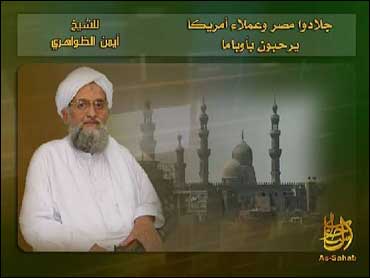 Increasing numbers of English-language Web sites are spreading al-Qaida's message to Muslims in the West.

They translate writings and sermons once largely out of reach of English readers and often feature charismatic clerics like Anwar al-Awlaki, who exchanged dozens of e-mails with the U.S. Army psychiatrist accused of the shootings at the Fort Hood military base in Texas.

The U.S.-born al-Awlaki has been an inspiration to several militants arrested in the United States and Canada in recent years, with his Web-based sermons often turning up on their computers.

"The point is you don't have to be an official part of al Qaeda to spread hatred and sectarian views,'' said Evan Kohlmann, a senior investigator for the New York-based NEFA Foundation, which researches Islamic militants.

Most of the radical Islamic sites are not run or directed by al Qaeda, but they provide a powerful tool for recruiting sympathizers to its cause of jihad, or holy war, against the United States, experts who track the activity said.

The number of English-language sites sympathetic to al Qaeda has risen from about 30 seven years ago to more than 200 recently, said Abdulmanam Almushawah, head of a Saudi government program called Assakeena, which works to combat militant Islamic Web sites.

In contrast, Arabic-language radical sites have dropped to around 50, down from 1,000 seven years ago, because of efforts by governments around the world to shut them down, he said.

Al Qaeda has long tried to reach a Western audience. Videotaped messages from its leader, Osama bin Laden, and his deputy Ayman al-Zawahri usually have English subtitles. But translations of writings and sermons that form the theological grounding for al Qaeda's ideology, along with preachers like al-Awlaki, mostly eliminate the language barrier.

Al-Awlaki's sermons have turned up on the computers of nearly every homegrown terror suspect arrested in the United States, Kohlmann said.

Members of a group of Canadian Muslims arrested in 2006 for allegedly forming a training camp and plotting bombing attacks in Toronto listened to his online calls for jihad, according to the case against them in court. According to prosecutors, an al-Awlaki sermon on jihad was among the numerous materials including videos of beheadings found on the computers of five men convicted in December of plotting attacks on the Fort Dix military base in New Jersey.

On his Web site and in widely circulated lectures, the 38-year-old al-Awlaki, now in hiding in Yemen, often calls on Muslims to fight against the United States, accusing it of waging war on Islam in Iraq and Afghanistan.
Nidal Hasan, who has been charged in the Fort Hood shootings, contacted al-Awlaki nearly a year ago. In an interview published in The Washington Post, al-Awlaki said he did not pressure Hasan to carry out the shooting, but after the attack, al-Awlaki praised him as a hero. U.S. investigators have said Hasan appears to have acted alone, not on orders from anyone, when he opened fire Nov. 5 at the Texas military base, killing 13.

The cleric met two of the 9/11 hijackers at mosques where he preached in the United States, and after his return to Yemen he was detained for more than a year on suspicion of involvement in a kidnapping gang. Yemeni officials released him because they could not confirm an al Qaeda link, but they say they are hunting for him again on suspicion he may have ties.

Such sites are expected to follow closely the upcoming trials of Hasan and Khalid Sheikh Mohammed, who is accused of being a top architect of the Sept. 11, 2001 attacks, said Rita Katz, head of the U.S. based SITE Intelligence Group, which follows on line militant traffic.

The Obama administration announced this week that Mohammed and four others will be put on trial in New York City.

Almushawah said clerics like al-Awlaki are "more dangerous than any other group.'' And if these clerics are jailed, "it's no big loss for al Qaeda because they don't belong to the network,'' he said.
Many of the sites post speeches by English-speaking clerics like al-Awlaki or, more often, translations of sermons and lectures by Arabic-speaking clerics.

One site, the Pulpit of Monotheism and Jihad links to sermons by al-Awlaki, alongside English versions of speeches by some of the top sheikhs of jihadist ideology even some who are dead like Abdullah Azzam.

The proliferation of sites in English means "potential jihadists can know only their native language and still be radicalized,'' Katz said.

While al-Awlaki has become popular, "other, more prominent and influential Arabic-speaking jihadist sheikhs ... have had their works and speeches translated into English and other languages. Their works tend to be used more often by the jihadist community to justify violence,'' she said in an e-mail interview. Al-Awlaki "fills a void in that he can directly interact, understand and communicate with English-speaking jihadists in a way that Arabic-speaking clerics cannot.''

Almushawah says most of the servers for the sites are in Britain, but they can be run from anywhere and most of them are operated and receive content from the U.S. Most of the clerics who appear on them are in the Arab world with some in France and England.

U.S. intelligence officials declined to comment on the spread of English language sites and their influence.
Saudi Arabia set up its Assakeena program after authorities found that 70 percent of al Qaeda sympathizers were drawn to the group through the Internet. In the campaign, government-backed preachers monitor 400 radical Islamic web sites and inject a more moderate message on the sites.

The campaigners also directly contact and dialogue with militants they encounter on the Web, conversations that can take weeks or months. Of 2,631 militants contacted by the group, 1,170 withdrew their support for radicals, according to the campaign. About a fifth of the militants were from Europe and North American, and the rest from Arab countries.

Assakeena the name is Arabic for "Tranquility from God'' is part of other hearts-and-minds programs the kingdom launched to complement its crackdown on al Qaeda after the group carried out a series of attacks on foreigners and oil infrastructure in 2004.