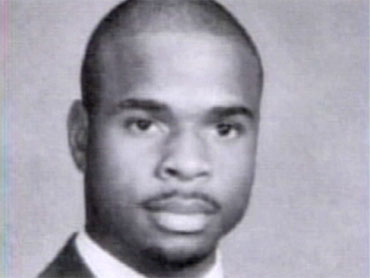 He was raised in New Jersey, where he was on the high school wrestling team and earned a black belt in karate. Nearly a decade later, Sharif Mobley is under arrest in Yemen, suspected of being an al Qaeda member and accused of killing a guard in an attempt to break out of a hospital.

While some acquaintances were startled by the news out of the Middle East on Thursday, a former classmate said that Mobley had strong religious views in high school, often trying to convert friends to Islam, and became increasingly radical, especially after they graduated in 2002.

Roman Castro, 25, who did a tour with the Army in Iraq, said the last time he saw Mobley, about four years ago, Mobley yelled, "Get the hell away from me, you Muslim killer!"

The FBI, the State Department and other authorities said they were trying to gather information about Mobley. But the allegations appeared to illustrate a phenomenon U.S. intelligence officials have warned about: American Muslims becoming radicalized and joining terrorist movements overseas.

Sources say Mobley has been on the FBI's radar for a few months, reports CBS News Correspondent Bob Orr. The FBI will not say what piqued their interest in Mobley, only that it was "intelligence-related."

Officials believe Mobley may have become radicalized through extreme Internet sites and had traveled to Yemen seeking to join Islamist fighters, Orr reports.

Mobley, a 26-year-old natural-born U.S. citizen, was identified by Yemeni officials as a Somali-American. Mobley moved to Yemen about two years ago, supposedly to learn Arabic and study Islam, a former neighbor said.

Before that, Mobley worked for several contractors at three nuclear power plants in New Jersey from 2002 to 2008, PSEG Nuclear spokesman Joe Delmar said. Mobley carried supplies and did maintenance work at the plants on Artificial Island in Lower Alloways Creek, and worked at other plants in the region as well.

He satisfied federal background checks as recently as 2008, Delmar said, adding that the plant is cooperating with authorities.

Mike Drewniak, a spokesman for New Jersey Gov. Chris Christie, said that his office had been told that Mobley was always supervised, caused no problems and was not believed to have breached security at the plants.

Joe Szafran, a spokesman for Exelon Corp., which owns nuclear plants at three facilities in eastern Pennsylvania, referred all questions about whether Mobley worked there to the FBI. An FBI spokesman did not immediately return a call.

Also, Mohammed Albasha, spokesman for the Yemeni Embassy in Washington, said there was no immediate connection between Mobley's activities or capture in Yemen and his work at the plants.

Mobley was arrested in Yemen in a roundup of suspected al Qaeda members this month and was being treated at a hospital in San'a when he got into a shootout with guards during an escape attempt, killing one and wounding another, said Mohammed Albasha, spokesman for the Yemeni Embassy in Washington.

U.S. officials worry that Yemen is becoming the next significant terrorist staging ground because of signs that lower-level al Qaeda operatives have been moving into the country from the Afghanistan-Pakistan border region.

The al Qaeda branch in Yemen was linked to the failed Christmas Day bombing of a Detroit-bound airliner. Also, Maj. Nidal Hasan, the Army psychiatrist accused of killing 13 people in a shooting rampage at Fort Hood last year, had exchanged e-mails with an extremist cleric in Yemen.

In response to the threat, the Pentagon has proposed spending $150 million to help Yemen battle insurgents within its borders.

Somali-Americans have become a particular concern to American security officials. Young Somali-American men have been traveling from the U.S. to fight jihad in Somalia, raising fears they are receiving terror training and returning to the U.S. ready to launch attacks.

Americans are valuable to terrorist groups, in part because they can travel easily, without arousing much suspicion.

"The U.S. passport is the gold standard," said Fred Burton, a former U.S. counterintelligence agent who is now a vice president at STRATFOR, a global intelligence company in Austin, Texas.

Mobley was among 11 al Qaeda suspects detained this month in a security sweep in San'a, the capital, officials said. He was taken to the hospital over the weekend after he complained of feeling ill. He snatched a gun from a security guard and shot him, then got into a shootout that ended with anti-police terrorism capturing him, authorities said.

In Yemen, killing a guard during an escape attempt could result in execution by a firing squad.

Mobley graduated from high school in 2002 in the rural southern New Jersey town of Buena, and afterward lived in Philadelphia and Newark, Del. Castro said that in the past few years, Mobley organized religious pilgrimages to the Middle East for other Muslims.

Mobley's mother, Cynthia Mobley, told WMGM-TV in Atlantic City, N.J., that her son is "an excellent person who's never been in trouble" and "a good Muslim."

As his father, Charles Mobley, pulled out of the family's driveway on the way to see a lawyer Thursday, he said: "I can tell you this: He's no terrorist."

Abdel-Hadi Shehata, imam of the Islamic Society of Delaware, said Mobley used to live one floor below him in an aging apartment complex in Newark and occasionally visited the society's Newark mosque to pray. Shehata said Mobley, who had a wife and young daughter, moved to Yemen about two years ago.

"I think to learn Arabic or something like that ... and to learn more about the religion Islam," he said.

Shehata said Mobley never discussed politics or his religious views with him, but sometimes would ask his advice about how to pray and how to cleanse himself.

Marisa Porges, a fellow at the Council on Foreign Relations, said many Arabic language scholars travel to Yemen to study the language because the dialect there is so useful. She said there is a risk that even those who travel there to study can become radicalized.

"It's often the case that their being there makes an individual more vulnerable to radicalization," she said.

Umar Hassan-El, assistant imam at the Islamic Society of Delaware's mosque in Wilmington, Del., said he roomed with Mobley during a 2004 pilgrimage to Mecca.

The worst Mobley did, Hassan-El said, was forget to pick up his clothes or interrupt discussions among older Muslims.

"He gave no indication that he would join a group that he's alleged to be a part of right now," said Hassan-El. "I never heard that boy ever talk about shooting anybody, killing anybody."

As a teenager, Mobley studied martial arts at Yi's Karate Institute in Sewell, N.J., earning his black belt after three years, according to the master of the dojo, Chom Sam Kim.

"He was very athletic, and had a good respect and attitude," Kim said. Kim said he was surprised to hear the allegations against Mobley: "I never saw anything abnormal about him during the time he was here."