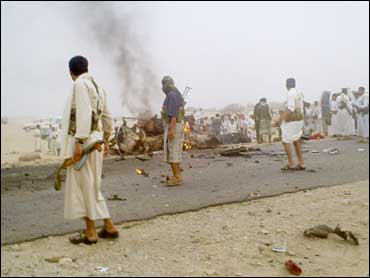 Witnesses said the bomber drove a car through the gate of the temple compound, and the vehicle exploded near the structure, which was built about 3,000 years ago and dedicated to the Queen of Sheba.

Spain's foreign minister, Miguel Angel Moratinos, said seven dead and five wounded — one seriously — were Spaniards when the bomber drove into the middle of the Spanish convoy.

A four-wheel drive pick-up car entered the site as a procession of four cars was getting ready to get out from the site with police escorts, Deputy Minister of Interior, General Brigade Mohammed al-Qusi told the Yemen Observer.

Witnesses who arrived after the scene said the only saw bits of cars and bodies strewn on the ground, he said.

"We could not recognizes what kind of cars they were, we just saw small parts of them here and there, and dead bodies were burning," he said. "It was very horrible sight."

No one claimed responsibility for the attack in the central Marib province, about 85 miles east of the capital San'a, but authorities linked the suicide bomber to al Qaeda. Police said they received information last month about a possible al Qaeda attack.

Less than two weeks ago, the U.S. Embassy warned Americans to avoid the area. On June 23 in the neighboring Shabwa province, a Yemeni guard opened fire on a group of foreign oil workers shortly after they landed at a company airstrip, killing one and wounding five — including an American.

The provincial governor said at the time that the guard was mentally ill, but the U.S. Embassy in San'a canceled travel to the two provinces "for the near future" and recommended that Americans avoid the area.

Spain has also issued warnings about the area.

Al Qaeda has an active presence in Yemen, the ancestral home of Osama bin Laden, despite government efforts to fight the terror network. Al Qaeda was blamed for the 2000 bombing of the USS Cole in Aden that killed 17 American sailors and the attack on a French oil tanker that killed one person two years later.

Yemen was a haven for Islamists from across the Arab world during the 1990s, but after the Sept. 11, 2001, attacks, it declared support for the U.S. campaign against international terrorism. Its crackdown on militants has suffered a number of setbacks, however, such as the February 2006 prison breakout of 23 convicts — some of whom had been jailed for al Qaeda-linked crimes.

Foreign interests in Yemen often face low-level threats and tourists are frequently kidnapped by tribes seeking to win concessions from the government, either better services or the release of jailed relatives. Most of the hostages have been released unharmed.