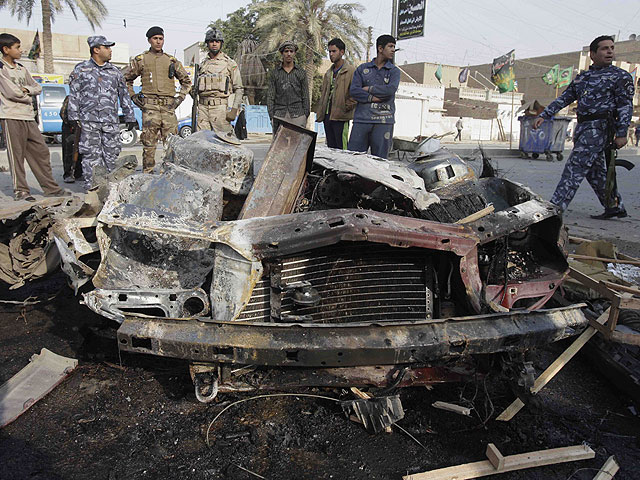 BAGHDAD - An al Qaeda front group in Iraq has claimed responsibility for the wave of terrifying attacks that rocked Baghdad last week and killed 69 people.

The coordinated attacks on Thursday targeted markets, grocery stores, cafes and government buildings in a dozen mostly Shiite neighborhoods. They coincided with a government crisis that has already strained ties between Sunnis and Shiites to the breaking point.

They were the first major attacks since U.S. troops completed a full withdrawal from Iraq this month, increasing doubts about the ability of Iraqi security forces to protect the country. Nearly 200 people were wounded in the bombings.

According to the SITE Intelligence Group, a U.S.-based organization that monitors jihadist Web traffic, the claim of responsibility was posted late Monday on militant websites.

In it, the Islamic State of Iraq said the assaults, which it referred to as the "Thursday Invasion," were meant to support Sunnis in prisons and avenge those who were executed by the Shiite-led government.

"The series of special invasions launched ... to support the weak Sunnis in the prisons of the apostates and to retaliate for the captives who were executed," said the statement.

The group said the attacks were proof that they "know where and when to strike and the mujahideen will never stand with their hands tied while the pernicious Iranian project shows its ugly face."

The remark was in reference to accusations by Sunni militants that Iraq's Shiite-dominated government has allied itself too closely with neighboring Shiite power Iran, a bitter enemy of Iraq under the regime of Saddam Hussein.

U.S. and some Iraqi officials have warned of a resurgence of Sunni and Shiite militants and an increase in violence after the U.S. troop withdrawal.

Along with the security challenge, Iraq is facing a possible increase in political tension as Iraq's Shiite prime minister, Nouri al-Maliki, is engaged in a showdown with the top Sunni political leader in the country.

Al-Maliki's government has issued an arrest warrant for Sunni Vice President Tariq al-Hashemi on charges that he ran hit squads against government officials.

Al-Hashemi has denied the charges and said they are politically motivated.