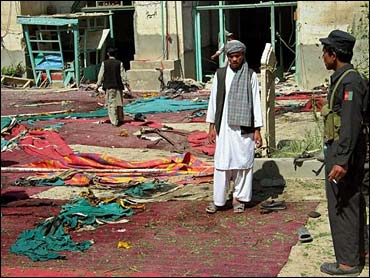 A suspected al Qaeda suicide bomber blew himself up Wednesday during the funeral of a moderate Muslim cleric, killing 20 people including the Kabul police chief, and wounding 42 others, officials said.

The attack was the deadliest in Afghanistan since a major upsurge in violence kicked off in March, belying U.S. claims that it is stabilizing the country and reinforcing fears militants here are copying the tactics of those in Iraq.

Hundreds of mourners were crowded inside the Mullah Abdul Fayaz Mosque in the center of the main southern city of Kandahar when the militant walked in and detonated explosives strapped to his body, leaving blood and body parts littered over a wide area.

President Hamid Karzai condemned the assault as an "act of cowardice by the enemies of Islam and the enemies of the peace of Afghan people" and ordered a high-level investigation.

"The attacker was a member of al Qaeda. We have found documents on his body that show he was an Arab," Sherzai told reporters. "We had an intelligence report that Arab al Qaeda teams had entered Afghanistan and had been planning terrorist attacks." He did not elaborate.

A purported Taliban spokesman, Mullah Latif Hakimi, said in a telephone call earlier to The Associated Press that the rebels were not responsible for the bombing. Hakimi often calls news organizations, usually to claim responsibility for attacks on behalf of the Taliban. His information has sometimes proven untrue or exaggerated, and his exact tie to the rebel leadership is not clear.

Among the dead was Kabul police chief Gen. Akram Khakrezwal, two of his nephews and six of his bodyguards, Sherzai said. The attacker detonated the explosives after coming close to the police commander, but it was not clear he was targeted, Afghan Ministry of Interior spokesman Latfullah Mashal said.

Khakrezwal, a supporter of Karzai, had been the Kabul police chief for two months. Prior to that, he had been the police commander in a northern city and earlier in Kandahar.

Many local leaders had been expected to attend the funeral of Mullah Abdul Fayaz, the top Muslim leader in the province, whom the mosque is named after.

Fayaz, also a supporter of Karzai, was shot dead in Kandahar on Sunday by suspected Taliban gunmen — a week after he led a call for people not to support the rebels.

Kandahar was a stronghold of the Taliban regime that was ousted from power in late 2001 by U.S.-led forces for harboring bin Laden.

Col. James Yonts, the U.S. military spokesman in Afghanistan, condemned the blast, saying in a statement that it was an "atrocious act of violence upon innocent civilians and a mosque."

Witnesses described the carnage at the mosque:

"I was knocked unconscious by the blast. When I woke up, so many people were killed or wounded. People were running around, some were lying on the ground crying. Dead bodies were everywhere," said Nanai Agha, a mourner who was inside the mosque but survived the blast because he was behind a wall when the bomb detonated.

In a second attack Wednesday west of Kandahar, a bomb exploded on a bridge as a group of Afghan deminers working on a Japanese-funded project were driving over it, killing two of them and wounding five others, said Patrick Fruchet, spokesman for the U.N. Mine Action Center for Afghanistan.

The bombings came on the heels of a major upsurge in rebel violence in recent months, including assassinations, almost-daily clashes with rebels and the kidnapping of an Italian aid worker. Though the insurgents have stepped up their offensive, they have also suffered heavy casualties, losing about 200 men since March, after a winter lull in the fighting, according to American and Afghan officials.

Tension in Afghanistan as well as neighboring Pakistan has also been high after deadly anti-American riots sparked by allegations that interrogators at the U.S. prison at Guantanamo Bay, Cuba, defiled the Quran.