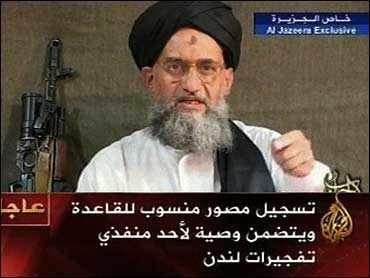 Al Qaeda's No. 2, Ayman al-Zawahri, claimed responsibility for the July 7 London bombings in a video aired Thursday on Al-Jazeera that included a farewell statement by a man identified as one of the four suicide attackers.

It was the first explicit claim of responsibility for the blasts by the terrorist group headed by Osama bin Laden.

Al-Zawahri threatened the West with "more catastrophes" in retaliation for the policies of President Bush and British Prime Minister Tony Blair.

He did not say outright that his terror group carried out the bombings on the London transport system that killed 56 people, but he said they were a direct response to Britain's foreign policies and its rejection of a truce that al Qaeda offered Europe in April 2004.

"I talk to you today about the blessed London battle which came as a slap to the face of the tyrannical, Crusader British arrogance," al-Zawahri said. "It's a sip from the glass that the Muslims have been drinking from."

"This blessed battle has transferred — like its glorious predecessors in New York, Washington, and Madrid — the battle to the enemies' land, after many centuries of the battle being on our (Muslim) land and after (Western) troops have occupied our land in Chechnya, Afghanistan, Iraq and Palestine."

After the Madrid bombings in March 2004, bin Laden was reported to have offered European countries a three-month cease-fire in which he invited them to consider his demands.

Al-Jazeera's newscaster said the al-Zawahri tape contained a video recording by one of the suicide bombers who took part in the July 7 attacks.

Speaking English with a heavy Yorkshire accent, the bomber, Mohammad Sidique Khan, said he had forsaken "everything for what we believe" and went on to accuse Western civilians of being directly responsible for the terror attacks that befall them.

"Your democratically elected governments continuously perpetuate injustice against my people all over the world, and your support of them makes you directly responsible, just as I am directly responsible for protecting and avenging my Muslim brothers and sisters," Khan said.

Khan was shown wearing a red-and-white checked keffiyeh and a dark jacket. He had a trimmed beard and appeared to be sitting against a wall lined with an ornate carpet.

In the video, the image of Khan resembled photos of him published after the deadly attacks.

Al-Zawahri appeared in black turban and white robes with an automatic weapon leaning against the wall beside him.

Khan, 30, was a Leeds resident who died in the bombing of the London Underground train near Edgware Road.

In a tape aired Aug. 4 by Al-Jazeera, al-Zawahri did not directly claim that al Qaeda carried out the July 7 bombings or the failed July 21 attacks, but he brought the July 7 attacks under al Qaeda's wing and depicted the terror network as still capable of delivering strikes around the world despite arrests in Europe and blows against its leadership in Pakistan and Afghanistan. He presented the attacks as a result of Blair's decision to deploy troops in Iraq.

There were at least two purported claims of responsibility on Islamic Web sites in the week following the July 7 attack. One was from a group calling itself The Secret Organization of al Qaeda in Europe, while the other was from the Abu Hafs al-Masri Brigades, which has made dubious claims in the past.

The July 7 bombings killed 52 people, in addition to the four bombers.