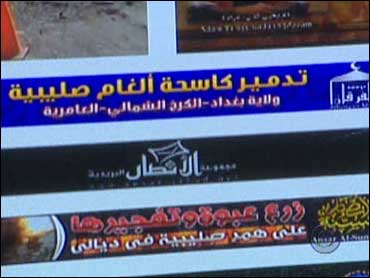 The internet has long been an al Qaeda stronghold - a center for raising money and spreading propaganda. A record 97 messages were posted in 2007.

But now, the cyber world has also largely replaced conventional training camps and has become the primary location where Islamic radicals are recruited, trained and sent on their way to carry out attacks.

CBS News correspondent Bob Orr spoke to Erich Marquardt, senior editor at West Point's Combating Terrorism Center and asked him if he would characterize the internet as a meeting place for would-be terrorists.

The Combating Terrorism Center published a report on Thursday claiming radical websites "have evolved into a disturbing MySpace-like social-networking hub for...extremists...intent on becoming the next generation of terrorists, hijackers and even suicide bombers."

"They put vast amounts of literature on these websites," Marquardt said, "texts justifying attacks through Islam, military training tactics, bomb-making skills - all of this, or much of this, has gone online."

"They talk to you and they befriend you and they recruit you into becoming a member of al Qaeda," Al-Ahmed explained.

"So I could go in and I could find somebody to tell me about the organization?" Orr asked.

"Train me on how to do certain attacks?"

"And then maybe give me directions on where I should go?"

And there is no shortage of interest, Orr reports. Pro al Qaeda internet sites have recorded millions of hits from potential recruits, called to Jihad on the World Wide Web.

Listen to Larry Magid's Podcast about how Britain is tackling the online terror threat.