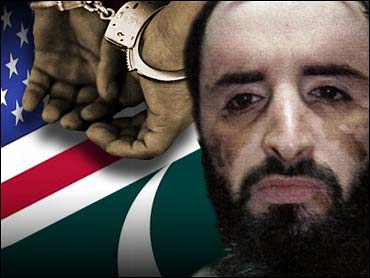 Senior al Qaeda militant Abu Farraj al-Libbi will be handed over to the United States for prosecution, President Gen. Pervez Musharraf said Tuesday, ending speculation that the military ruler would seek to try the Libyan-born terror suspect here for two attempts on the Pakistani leader's life.

"We are obviously going to deport him" Musharraf said during an interview on CNN, referring to al-Libbi. "We don't want him in Pakistan."

He said al-Libbi, believed to be a close confidant of terror mastermind Osama bin Laden, did not provide any leads during interrogation on bin Laden's whereabouts.

"No, he did not provide useful information about Osama bin Laden," Musharraf said, speaking from the Pakistani capital. "He says he is not in contact with Osama bin Laden."

Al-Libbi was arrested May 2 after a shootout at a graveyard in northwestern Pakistan. At the time, a senior intelligence officer told The Associated Press he had been in frequent contact with bin Laden in recent months and that Pakistani interrogators were grilling him on the terror chief's whereabouts.

It was not clear when al-Libbi would be turned over, or where he is being held now. At one point during the interview, Musharraf intimated that he believed the terror suspect had already been handed over to U.S. custody, before correcting himself later.

Some officials have described al-Libbi as al Qaeda's No. 3 leader, after bin Laden and Egyptian surgeon Ayman al-Zawahri. However, he did not appear on the FBI list of the world's most wanted terrorists, and his exact role in al Qaeda is not clear.

It is not entirely clear what charges if any he might face in the United States, or if he has been indicted by any U.S. court.

In Pakistan, al-Libbi was wanted for allegedly masterminding two attempts in December 2003 on Musharraf's life. The president was unhurt, but 17 people died in the second attack, on Christmas Day.

The assassination attempts carry the death penalty in Pakistan. The personal nature of the attacks led many to believe Musharraf would seek to try al-Libbi himself, but the general, a staunch ally of the United States, said that wouldn't be necessary.

"We deport al Qaeda suspects to the United States for further interrogations," the president said.

Musharraf said Pakistan has deployed about 70,000 troops in the country's tribal regions near Afghanistan. Other officials say they have turned over more than 700 suspects to the U.S., including several of the terror group's top leaders.

Musharraf reiterated Pakistani claims that it has broken the back of the terror group.

"Al Qaeda no longer exists as a homogenous body," he said, adding that remaining al Qaeda fugitives are on the run and travel in small groups of no more than 10 to 12 men.

He stressed that scores of Pakistani security forces had died in the war on terrorism, many in clashes in Waziristan, the tribal region near Afghanistan where bin Laden is believed to be hiding.