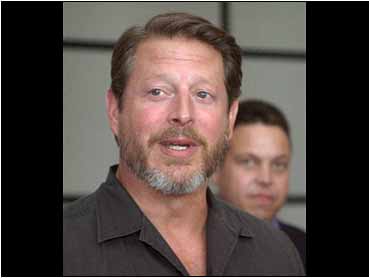 Delivering his first public foreign policy address since the presidential election, Al Gore renewed his support for the administration's "counterattack" against terrorism, but accused it of showing "impatience and disdain" toward U.S. allies in the war.

The former vice president also unleashed a flourish of self-effacing humor in what was his latest step back into the national spotlight.

"I am Al Gore. I used to be the future president of the United States of America," he told several hundred members of the Council on Foreign Relations on Tuesday, referring to the phrase he used repeatedly during his failed 2000 presidential campaign.

"This is a period of transition for me. You never know what is going to happen," Gore, accompanied by his wife Tipper, two daughters and son-in-law, said with a laugh.

Gore was at times critical and supportive of President Bush's response to terrorism.

He warned that military force alone would not win the struggle against terrorism, but embraced Mr. Bush's description of Iraq, Iran and North Korea as an "axis of evil." He renewed his support for the administration's "highly successful opening counterattack" to the terrorist attacks of Sept. 11.

But Gore said other dangerous forces have to be addressed, such as poverty, ignorance, environmental problems, disease, corruption and political oppression. He urged increased spending on foreign aid.

Gore said it is crucial that the administration show "a more evident respect" for the coalition of allies it has built or the alliance could quickly crumble. Gore said the administration sometimes sends the message: "With others, if we must; by ourselves, if possible."

Gore urged an increase in the size of the international security force in Afghanistan and said U.S. forces should remain engaged in the troubled country.

He said that U.S. policy should also be aimed at "draining the aquifer of anger that underlies terrorism."

"The evil we now confront is not just the one-time creation of a charismatic leader and his co-conspirators, or even a handful of regimes," Gore said. "What we deal with now is today's manifestation of an anger welling up from deep layers of grievance shared by many millions of people."

Gore, a two-term vice president and 23-year veteran of Congress, had an influential hand in former President Clinton's foreign policy and traveled frequently overseas to represent the United States.

He headed several country-to-country commissions designed to shape U.S. relations with such nations as Russia, Ukraine, Egypt and South Africa. His work on those bilateral commissions was reflected on the campaign trail as he rattled off the names of presidents and prime ministers.

Gore had advocated an active and involved international role for the United States, much like the policy Bush has pursued since Sept. 11, when he shelved the go-it-alone approach he had championed during the campaign and his first months in office.

Ten days ago Gore gave a "return to the national debate" speech at a Tennessee Democratic Party fund-raiser. In recent months he's also appeared at Democratic fund-raisers in key political states such as Florida, New Hampshire and Iowa. Following the Sept. 11 attacks, he spoke out to proclaim his support of Bush in the war on terrorism.

In the latest speech, Gore offered some cautionary thoughts on dealing with Iraq, Iran and North Korea.

The United States must deal with the threat of Iraq "on our terms," he said. That means U.S. strategy must protect the security and interest of allies like Saudi Arabia. Gore said that once a strategy for Iraq is developed, "we must be prepared to go the limit."

Iran must be recognized as a potential threat greater than Iraq, but the U.S. should also find ways "to encourage the majority who obviously wish to develop a more constructive relationship with us," Gore said.

And he said the United States needs to keep the peace on the Korean peninsula by being ready for war.

Explaining why he did not speak out on public policy before now, he said, "In the aftermath of a very divisive election I thought it would be graceless to do so, and possibly damaging to the nation. And then came Sept. 11."