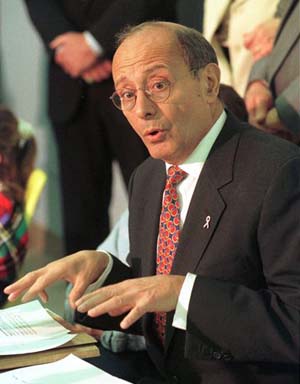 Republican Former Sen. Al D'Amato of New York has become something of an unlikely hero to the left thanks to a video of him calling GOP strategist Jack Burkman a "nasty racist."

The video at left shows the remarkable encounter. The fireworks begin around the 4:30 mark.

D'Amato is responding to Burkman's argument during a Fox Business Network roundtable in which Burkman says that "most of these guys working in the Post Office should be driving cabs and I think we should stop importing labor from Nigeria and Ethiopia - that's about the skill level."

D'Amato agrees with Berkman's suggestion that the Postal Service should be privatized - but not his characterization of postal workers.

After Burkman restates that "most of the people employed by the United States Post Office...are thoroughly unskilled labor - that is why, I allege, they should be bumped down to driving cabs," D'Amato interjects, "you are a nasty racist."

"You brought in the fact that it's a bunch of Nigerians...that's a bunch of bulls**t," he continued. "And you should be ashamed of yourself, and have your mouth washed out. What the hell are you talking about?"

After Burkman tries to respond, D'Amato cuts him off, saying, "Shut up, I've listened to your racist bulls**t."

"It's one thing to say that they're hiring people that are unskilled, that you can save money, that you can run it better, that it is inefficient, ineffective, and I agree to all of those things, but for you to bring in this bulls**t about 'a bunch of Nigerians,' etc, it's out of line," he added.

"This has nothing to do with whether somebody should be driving a taxicab or not," she said.

One side note - Around the 2:00 mark, Burkman calls for the government to "cease all federal funding" of the Postal Service, which has lost billions of dollars in recent years. In light of that claim, it's important to note that the Postal Service is legally prohibited from taking tax dollars. (Though it does borrow from the U.S. Treasury.)