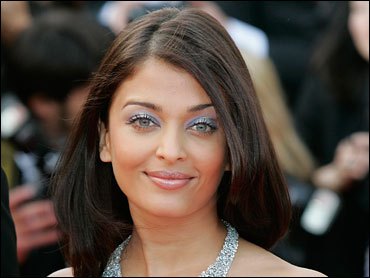 Aishwarya Bachchan, formerly Rai, made one of her first appearances after her wedding to fellow Bollywood star Abhishek Bachchan on April 20, 2007 in Mumbai, India.

Appearing at the Cannes Film Festival, Bachchan said she is still getting used to being referred to by her new last name but likes it nonetheless. "I was kind of getting used to that because it's the first time you're being addressed by a new surname and I've maybe done a double take at times but pleasantly so, it makes us smile, so it's been good," she added.

She was at the film festival as part of L'Oreal's team of models with husband Abhishek. Bachchan has packed all her obligations including press interviews within a two day slot taken out of her personal time post marriage.

2Bachchan will return to shooting an epic film with director Ashutosh Gowariker titled "Jodha Akbar" based on the love affair between Mughal Emperor Akbar and his Rajput wife Jodha. She is cast opposite Bollywood superstar Hrithik Roshan in the film.

Abhishek and Aishwarya Bachchan walked the red carpet at the opening night on Wednesday, May 16, 2007 for the screening of the film "My Blueberry Nights."

The Cannes Film Festival will run through until May 27 in Cannes, in the South of France.