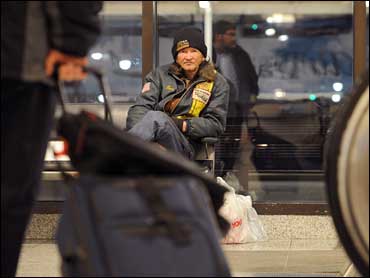 Life has taken Roger Gleen up and down the East Coast, and on this night the weary traveler settles into a chair in the corner of the world's busiest airport.

His bags propped neatly beside him, Gleen is among a dozen or so ticketless passengers at Hartsfield-Jackson Atlanta International Airport, folks with no destination in mind.

They're Hartsfield's homeless, and like their counterparts in other major terminals, they've successfully resisted most efforts to clear them out.

"We have to go sooner or later," Gleen admits. "But you have people (who have) been coming to the airport for years."

Clusters of homeless have long settled in terminals from Philadelphia to Chicago, ideal round-the-clock shelters for men and women displaced by cities trying to clean up their downtowns.

Federal authorities labeled this population a security threat in 2005, warning that terrorists might disguise themselves as homeless to do surveillance on their targets.

Hartsfield and other airports consider the homeless more nuisance than danger, just as they're seen in entertainment, shopping and transit districts everywhere. There has been no record of any security threat posed by the "handful" of blanket-covered vagrants sometimes found sleeping near ticket areas and other public spaces at Hartsfield, airport spokesman John Kennedy said.

Nonetheless, Hartsfield officials decided last year to join a program that trains police to identify homeless and coax them into shelters. Airport-based officers have since taken about 400 homeless to shelters, aided by monthly visits from United Way of Atlanta outreach workers, Kennedy said.

As quickly as they can cart them off, more are back, said Protip Biswas, head of United Way Atlanta's Regional Commission on Homelessness, which coordinates the outreach. His group collected 21 men and women from the terminal on a recent visit.

Despite the double-team approach, "Last time we went out, we thought it was more" than the time before that, Biswas said.

Some of the nation's biggest airports have considered different approaches to clearing out vagrants.

In the early '90s, Chicago's O'Hare International Airport thought about building a shelter on site. The same decade saw legislators in Hawaii weigh whether to set up mental health and alternative housing programs for the roughly 70 homeless bedding down at Honolulu International Airport every night.

Neither effort was realized.

At Cleveland Hopkins International Airport, the city and homeless advocates sent outreach teams into the airport almost every night for two months in 2006 after police found dozens of homeless sleeping in sensitive parts of the airport, such as in doorways to secured areas, said Brian Davis, head of the Northeast Ohio Coalition for the Homeless.

The effort cleared all but the most stubborn handful of men and women, and most of them have stayed away. It took city funds and five outreach teams available for near nightly sweeps to make it happen though, almost unheard of resources even in the best of times.

Airport officers fill the gaps, though Biswas acknowledged that effort could be stronger.

"An increase in HOPE officers would certainly be helpful," Biswas said, referring to the police department's homeless outreach squadron. "But we would need a corresponding increase in beds."

Homeless arrive at Hartsfield on the last subway trains of the evening, which almost ensures they can't be forced to leave until the trains start running again in the morning.

Throughout the night they often blend in with stranded fliers, a shoeless foot or tattered clothes some of the only signs they're not ordinary travelers. Some roam the terminal. Others find a comfy resting spot among business types and families sitting in the atrium.

All of them frequent the eating areas and bathrooms.

For men like Gleen, the airport is ideal: A 24-hour public setting with food and water, where nobody looks twice if you snooze for hours.

"I don't bother nobody. I just get me a place, and I just stay," said Gleen, who preferred coming to the airport over the last few months to bunking with relatives or staying in a noisy downtown shelter.

Indeed, most airport homeless are independent types, less likely than others to find cover under bridges or on street corners, explained Michael Stoops, executive director of the National Coalition for the Homeless. They also include the working poor or the newly unemployed, who tend to seek more privacy than a large public shelter can afford, Stoops said.

"An airport is one place where most Americans have been, it's a place where they can hide their homelessness," he said.

They can't all hide, however. At the front end of another all-night shift at the airport, Bryant spots a woman pushing a cart piled with papers. Minutes later, hassled by United Way volunteers, the woman wanders off to catch a train.

By the start of her next shift, Bryant says, the same woman will be back. She sees her every night.

"(Police) sweep and take them to the train station, or either take them on the other side to wait for the train to come," she said. "The next morning, they come right back."