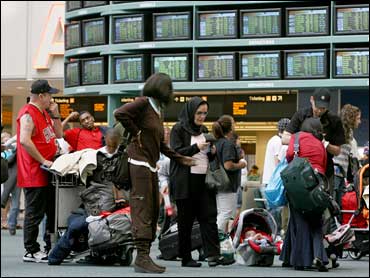 While passengers, pilots and flight attendants undergo careful screening, a CBS News hidden camera found that it is easy for employees at one of the busiest U.S. airports to get into a secure area: a flash of a badge, no X-rays, no physical screening — no questions asked.

"Could have a gun, could have a bomb. It's very scary," the airport employee told CBS News chief investigative correspondent Armen Keteyian.

An airport employee, who asked CBS News to disguise his identity and alter his voice, showed just how far the wrong person wearing the right badge could go.

"They could drop anything inside a plane or crowded terminal area whatever they decided to do, they could do it," he says.

Nearly 700,000 airport employees across the country — including cleaners, maintenance, catering and ramp workers — hold security IDs, known as "SIDA" badges. In most cases, these badges allow them complete access in and around airplanes.

Security analyst Charlie Slepian has deep concerns over the abundance of badges and the lack of oversight.

"Somebody can take a badge and duplicate it. They can lend it to somebody else," Slepian says. "They can give it away. It can be stolen. And once it's in the hands of somebody who's unauthorized, that person will have access to an airplane or baggage or cargo."

Most troubling, say pilots and flight attendants, is how many "inside" SIDA badges belong to outside contractors.

"These people are the lowest-waged people on the property," says flight attendant Charlie Black. "If approached and offered $5,000 or $10,000 to carry a knapsack, would they do it?"

Some say the TSA has it backwards when it puts flight crews — not ground workers — under the microscope.

"The people that we know the most about, that are the most carefully vetted employees, are the ones we are physically searching versus the people we don't know," says Capt. Tracy Price, a pilot.

CBS News wanted to talk with the TSA about this story. But despite repeated requests, no one from the agency would speak on camera. Instead, it issued a statement.

The TSA says employees working in secure areas "...are subject to multiple security layers ... including ... random screening at any time and without notice" and "are required to undergo extensive background checks."

But how extensive can those checks really be when just last year, 65 illegal immigrants got into the TSA system and were working in some of the most secure areas of several major U.S. airports before finally being arrested?