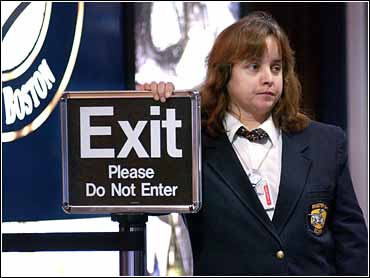 The tickets were used at five different airports in California and Nevada. We found that ticket and security agents paid little attention to the counterfeit driver's license, which contained a made-up name and address. Not one of them even asked for a second look or for it to be removed from the wallet, CBS News Correspondent Sandra Hughes reports.

The tickets and fake ID gave us access beyond security checkpoints and onto several flights. The license was looked at almost 20 different times and never detected as a fake.

We showed our undercover video to Sen. Barbara Boxer, D-Calif., a member of the Senate Transportation Committee.

"There didn't seem to be an understanding of the problem you've exposed," Boxer said. "Clearly, they glanced at the ID, glanced at the person's face, glanced at the ticket, but that's not the issue. If it's all phony to begin with, it doesn't really matter."

That's especially true if the airlines are relying on FBI lists of known terrorists.

"If they can go ahead and change their names and get phony ID, we're way behind the eight ball. We'll never catch them," Boxer said.

Our fake ID was checked by ticket agents and security checkpoint screeners employed or under contract to three major airlines: Southwest, United and American. All three airlines and the Federal Aviation Administration declined to talk on camera about our investigation.

One former FAA security official isn't surprised the government wouldn't talk about something he says it's ignored for years.

"I think that the ID process is basically bogus, it's one of those make-you-feel-good, comforting things, but in effect does nothing for security," said former FAA official Steve Elson.

We showed our counterfeit license to fraud expert Chris Bonzor before we turned it over to law enforcement.

"This is an excellent ID," Bonzor said. But he says properly trained airport workers should be able to detect it as a fake.

"By looking at it I would be able to identify this as a counterfeit," he said.

The California Department of Motor Vehicles offered to train California airport employees but the airports never took them up on it.

A handheld scanner that costs as little as $90 can detect a counterfeit driver's license by reading the magnetic stripe on the back. Thirty-nine states and Washington, D.C., currently use the security stripe feature.

"For a very, very small investment, you can have technology that would verify that document and would keep the bad guy off the plane," said Californian Department of Motor Vehicles director Steve Gurley.

The scanner is being used at Boston's Logan Airport and the federal government says it will start using it at Baltimore-Washington International Airport in the near future.

But there are 200 different forms of state government-issued identification cards.

"Today there aren't any minimum features that are required," said Linda Lewis, president of the American Association of Motor Vehicle Administrators. "We need to have both overt and covert features on the driver's license."

Lewis wants one standard driver's license; an idea opposed by many privacy advocates. But she says it may the only way to stay a step ahead of the counterfeiters and help keep the nation's skies secure.