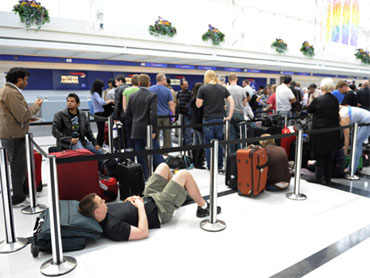 Giving up your airline seat may become a little less painful.

Federal officials are expected to announce this week a plan to raise the maximum amount that airlines must pay passengers who get bumped off an oversold flight, currently at $400 or $800 depending on how long a trip is delayed.

The potential inconvenience is greater now, too. Airlines have cut back on flights and planes are more crowded, so bumped passengers could wait hours or even days to find alternate arrangements.

"It might not be hours, but days before you get to where you're going," Pauline Frommer, creator of Pauline Frommer Guidebooks, told CBS News correspondent White Johnson. "There simply aren't enough airplane seats out there for the number of people who want to fly."

Passenger-rights groups have pushed the Transportation Department to raise the payout limits to $800 and $1,200 per traveler if the airline bumps you involuntarily. The agency has signaled that it plans some type of inflation adjustment in the limits, which were last raised in 2008. Officials declined to provide details.

The issue is overbooked flights. Airlines are allowed to sell more tickets than they have seats on the assumption that some passengers - usually those with refundable tickets - won't show up. What travelers' groups such as FlyersRights want is a limit on how many extra seats airlines can sell per flight. But industry insiders say that may be impractical because no-show rates vary by route, day and even hour.

When a flight is overbooked, airlines must first ask for volunteers before involuntarily bumping ticket holders. While volunteers can get travel vouchers, people forced off flights must be paid in cash or check. Critics say airlines often flout that rule. The Transportation Department recently fined Southwest Airlines $200,000 for that and other shortcomings in its bumping practices.

If you are bumped involuntarily, Frommer suggests going for the cash -- which can be used to purchase a ticket.

In the first three months of this year, American Eagle, the regional affiliate of American Airlines, was most likely to bump passengers involuntarily. US Airways, Continental, ExpressJet and Southwest were next. For several years, JetBlue has been the least likely to bump -- it says it gives customers $1,000 if they're booted off a flight.

The government has been moving to give airline customers more protections. One new rule prohibits the airlines from keeping passengers on a plane on the tarmac more than three hours. This week, the agency will also unveil proposed requirements for more information about advertised fares and checked-bag fees, and for contingency plans when aircraft are stuck on the tarmac for long delays.

Passenger-rights advocates say bigger payments to people forced to give up their seats could in turn force airlines to give volunteers more generous offers. But that remains to be seen.

Kate Hanni, who organized FlyersRights, says without limits on how many extra seats airlines can sell, "they'll find more deceptive ways to grab people's money and not give it back."