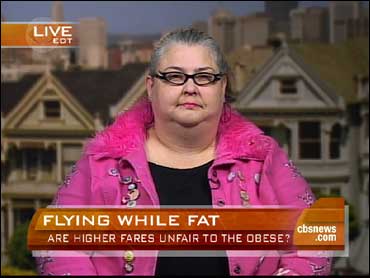 United Airlines is the latest carrier to penalize overweight passengers, by charging them for two seats if they can't fit comfortably into one and there are no other seats available.

But have airlines failed to keep up with the growing size of American fliers?

"Given that about 34 percent of Americans are obese, why not make one-third of the seats larger?" asked Rebecca Puhl, of Yale University.

Yet, sizes of seats on planes have basically have remained the same.

United's policy is directed toward people who can't fit in a single seat. The criteria: if a passenger cannot close the arm rest, or cannot fasten the seat belt with and extension.

Marilyn Wann, a weight diversity trainer and author of "FAT!So?: Because You Don't Have to Apologize for Your Size," talked to Early Show co-anchor Maggie Rodriguez from San Francisco about the hefty issue.

United Airlines officially responded by saying the new poicy "was created for the comfort and well-being of all our guests on board,m and is in response to the 700 complaints received last year from customers who did not have a comfortable flight because the person next to them infringed on their seat."

Although Wann admits she's "really not interested in pushing up against someone" sitting next to her on an airplane," she's looking at the -- bigger picture.

"The airlines are in the business of transporting human beings, not freight," Wann says, "and they need to find a way to accommodate all human beings."

Wann, a frequent flier, for work and for fun, says she knows firsthand that there are seats in first-class and coach that will accommodate taller passengers, but none for wider passengers.

"And instead of us feeling welcome by this entire industry, we're made to feel very unwelcome, in fact, to the point where we're not supposed to participate in the kinds of activities that everyone else does by traveling," she complained.

"Do you think it would be fair if the airlines weighed all their passengers and luggage and based the price of the package accordingly?" Rodriguez asked.

"I think thin passengers should be in solidarity with me if they get to pay less and I get to pay more. But only charging the fat people double is ... is punitive. And to do it at the moment when you're already at the airport, you already need to travel, is almost bait-and-switch. I get to the airport and I don't know whether I'm paying an amount that I agreed to, or an amount that I may not be able to afford, or that my company may not want to pay for me."

Wanns calls this "very discriminatory, daunting and scary" and says it can affect people who are "limited in their lives because of this policy."

"I appreciate that thinner people want a chair and they want to sit in it comfortably without someone else pushing in," she said. "I just want the same thing, and I want that for all of us. I don't see why we should be pitted against each other by an industry that hasn't figured out how to make money and be hospitable."