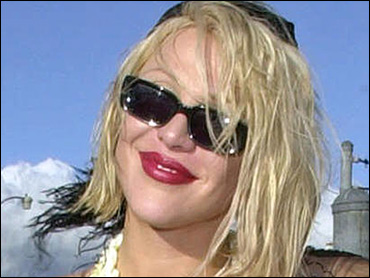 Singer-actress Courtney Love was detained by police Tuesday as she arrived at Heathrow airport on a trans-Atlantic flight, the airline said.

Love was "verbally abusive" to cabin crew during a Virgin Atlantic flight from Los Angeles, a spokesman for the airline said.

TV channel Sky News showed pictures of Love being escorted by two officers from the plane to a police van parked on the runway. She smiled sheepishly at the camera and covered her face with her hand before getting into the back of the van.

"She was verbally abusive toward our cabin crew and disruptive," Virgin Atlantic's director of corporate affairs Paul Moore said. The flight from Los Angeles landed at around 11 a.m. (6 a.m. EST.)

Metropolitan Police could not immediately confirm the arrest.

Last December, the Los Angeles Times reported that Love was among a group of celebrities who allegedly received addictive drugs from a California physician, Jules Mark Lusman. Lusman had his medical license revoked, the newspaper said.

Love had been due to attend a fund-raising event at London's Old Vic theater on Wednesday along with Elton John and Kevin Spacey.