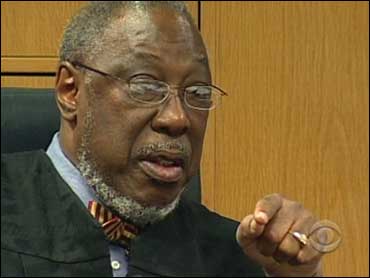 Jesse Jackson set off a furor recently on a very sensitive issue, when he accused Barack Obama of "talking down to black people." African Americans have been debating for years on how tough to be on young black men. But as CBS News correspondent Mark Strassmann reports, the debate is over for one judge in Atlanta. He's decided to be tough enough to change lives.

Judge Marvin Arrington has had it.

He says he's tired of seeing the same people in his Atlanta courtroom, over and over.

"Ninety percent of you are African Americans," he says to a courtroom packed with young black men.

Judge Arrington is offended -- and embarrassed.

"I wonder sometimes what in the world Dr. King and all them died for," he says.

It's a racial scolding. It's blunt, public and controversial.

"What in the world is going on? Why cannot we stop and get it right?" Arrington said in an interview with Strassmann.

In an unguarded moment this week, Jackson was clearly furious at Obama.

Not Arrington. He thinks the tough-love is long overdue. As a kid, Arrington was a bit of a thug, the sort of kid he often sees in court. Family and teachers set him straight.

Arrington's now trying to turn around the lives of others.

"You got a short life," he warned one defendant. "Try to make something out of it."

Get a job, get a degree, get a plan. Get it right. That's what the judge is trying to teach.

Arrington's even teamed up in Atlanta with Bill Cosby, who preaches the same message.

But not everyone in the black community supports their efforts. Critics call it a "Blame the Poor" tour. They resent men like Arrington and Cosby airing black America's dirty laundry in public.

"If you want to say that your children blowing each other's brains out, to mention it is dirty laundry, there's something wrong with you," Cosby said in response to the critics.

But Arrington has also taken it a step further. First he cleared his courtroom of all white people to chew out black defendants in private, in what he now admits was a mistake. A mistake that sent his critics howling.

"All I was trying to say to young people is, hey, we are for you," Arrington said. "Get yourself together."

Arrrington says early on, he learned if you see a good fight, get in it.

And he's vowed to continue this fight until the same faces stop walking through his door.