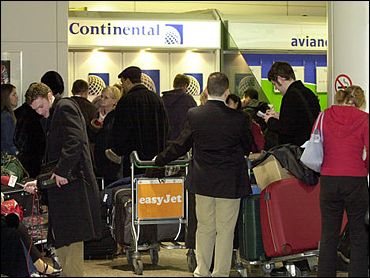 The specific terrorist threats that led to the cancellation seven flights over the weekend, including the first domestic flight to be grounded, have passed and there are no plans to ground any more flights, a government official said Monday.

The official, who spoke on condition of anonymity, said current intelligence does not indicate any more threats against specific flights.

A Continental Airlines plane that was scheduled to fly from Washington to Houston, where the Super Bowl was being played, was canceled Sunday because of new concerns about terrorism.

He added that the federal agency and Continental "worked closely on the matter."

There was no indication of what method of attack terrorists had in mind, reports CBS News correspondent Thalia Assuras. Still, there is concern about biological or chemical attacks and whether the U.S. can counter them.

The cancellation came after announcements Saturday that six international flights scheduled for Sunday and Monday were canceled because of security concerns.

In Houston, Continental spokesman David Messing said Sunday's flight was canceled "because we were unable to get security clearance from the Department of Homeland Security."

Messing said he did not know what security concerns the agency had and that passengers were being booked on other flights.

The flight was scheduled to take off from Dulles International Airport outside Washington at 5:45 p.m. EST Sunday and arrive at Bush Intercontinental Airport at 8:10 p.m. EST.

The National Football League's Super Bowl was being played Sunday evening at Reliant Stadium, approximately 27 miles (43 kilometers) from the airport.

However, a U.S. government official said the flight cancellation was not specifically connected to the Super Bowl.

A Continental Airlines flight Sunday from Glasgow, Scotland, to Los Angeles with an intermediate stop in Newark, New Jersey was canceled late Saturday because of security concerns, but there was no indication whether that was related to the Washington-Houston cancellation announced late Sunday.

The Scotland-Los Angeles flight was one of six U.S.-bound flight canceled Sunday and Monday because of security concerns. The U.S. government said it had fresh indications of al Qaeda's continued interest in targeting commercial planes flying to the United States.