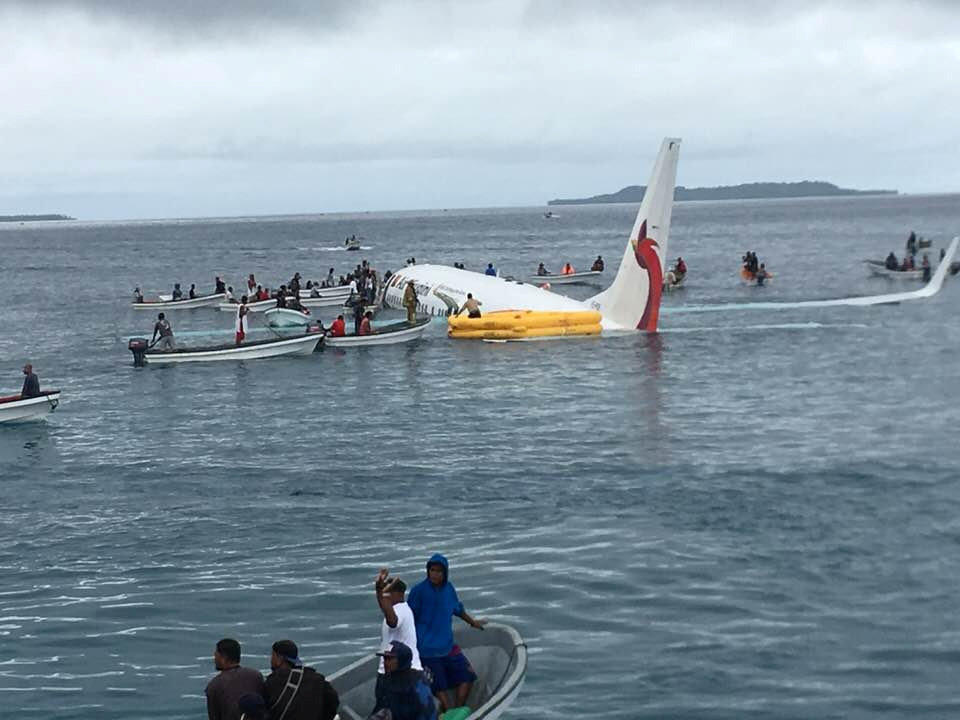 CANBERRA, Australia -- A South Pacific airline announced Monday that a passenger died when a plane crashed into a Pacific lagoon in Micronesia last week. Air Niugini had initially said all 47 passengers and crew had survived when a Boeing 737 crashed near the Chuuk island runway on Friday.

The Papua New Guinea national carrier said on Saturday one passenger had not been accounted for, but witnesses had reported he had reached a dinghy as U.S. Navy sailors and local residents rescued people from the sinking plane.

But Air Niugini chief executive Tahawar Durrani said the man's body was found by divers in the lagoon on Monday. The airline has not identified the man or released his nationality.

"Our outreach team is in touch with the man's family and we are making arrangements to repatriate his body," Durrani said in a statement.

Four passengers were in stable conditions at a Chuuk island hospital and will be taken soon to Guam for further treatment, Air Niugini said.

A Chuuk State Hospital official did not immediately respond to a request for comment on Monday.

Flight PX73 from nearby Pohnpei island crashed into a lagoon about 475 feet from the Chuuk International Airport runway, the airline said.

Air Niugini chairman Kosta Constaninou had said on Sunday that witnesses reported seeing the missing passenger board a dinghy as U.S. divers and local residents rescued the passengers and crew from the sinking plane.

What caused the crash and the exact sequence of events remains unclear. The airline and the U.S. Navy both said the plane landed in the lagoon short of the runway. Some witnesses thought the plane overshot the runway.

An official from Micronesia's Division of Civil Aviation did not immediately respond to a request for comment on Monday.

Air Niugini has operated since 1973. Data from the Aviation Safety Network indicates 111 people have died in crashes of PNG-registered airlines in the past two decades but none involved Air Niugini.