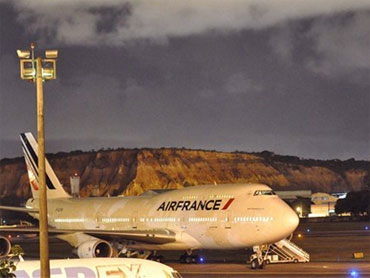 An Air France passenger jet resumed its flight from Rio to Paris after a bomb scare triggered an emergency landing in northeastern Brazil. No explosive was found on board.

The delay in the plane's departure from the northeastern city of Recife was necessary because regulations require that the crew receive a certain amount of rest, an Air France spokesman in Brazil told The Associated Press by telephone Sunday. He spoke on condition of anonymity because he was not authorized to discuss the matter.

Solange Argenta, a spokeswoman with the Brazilian government's airport authority, Infraero, said Sunday the jet was allowed to take off for Paris at 9:52 p.m. (8:52 EDT; 0052 GMT) after authorities inspected the plane and its luggage.

The bomb threat was phoned in to Rio's international airport by a female voice about 30 minutes after the plane took off, the Air France spokesman said. The control tower contacted the jet and the decision was made to land in Recife, he said.

In Paris, Air France spokesman Jerome N'Guyen confirmed a full inspection of the plane had been completed and nothing suspicious had been found.

The jet taxied to a secluded area of the airport and those on board were quickly removed, Infraero said in a statement. The airport was closed for about 30 minutes, and then reopened.

Flight 443 was on the same route as an Air France jet that crashed in June 2009 off Brazil's northeastern coast, killing all 228 on board. While no definite cause has been determined in the crash, authorities have repeatedly ruled out foul play.