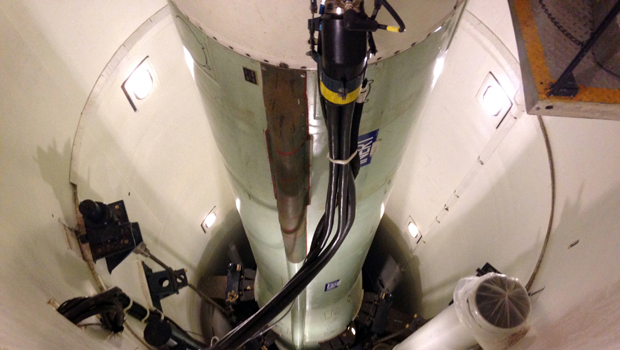 WASHINGTON -- Air Force Secretary Deborah Lee James said Thursday the number of nuclear force officers implicated in a proficiency test cheating scandal has grown to 92 out of a force of 500.

James spoke to reporters after touring nuclear bases around the country. The cheating has been found at Malmstrom Air Force Base in Montana. The Associated Press has revealed the overall nuclear force suffers from such low morale and burnout that they have committed serious security lapses and other breakdowns.

CBS News national security correspondent David Martin reported earlier this month, when 34 were implicated in the scandal, that a launch officer at Malmstrom allegedly texted the answers to a monthly proficiency test to other officers at the base.

Launch officers have to pass other monthly tests as well, including a simulated launch, so the cheating probably says more about their integrity than about their ability to perform the mission, Martin reported.

The Air Force announced recently that initially 17 officers were believed to have been involved in cheating on the monthly proficiency test to ensure they know how to maintain, and launch, nuclear missiles.

The widening cheating scandal has set off a top-level search for solutions.

Defense Secretary Chuck Hagel summoned 15 of his top Air Force, Navy and nuclear mission leaders to the Pentagon, where they worked Wednesday to figure out whether cultural problems within the nuclear force make launch officers feel more compelled to cheat on their proficiency tests.

Pentagon press secretary Rear Adm. John Kirby said the officials spent the bulk of the meeting discussing the breadth of the problems, which include low morale, cheating and serious security lapses, and how to begin solving them.

"I think the general consensus in the room was that we all need to accept the reality that there probably are systemic issues in the personnel growth and development inside the nuclear mission," Kirby told Pentagon reporters after the two-hour meeting with Hagel. "The secretary made it clear at the end of the meeting that he intends to do these on a regular basis."

The cheating scandal is the latest revelation in a growing morass of problems among the men and women who maintain and staff the nation's nuclear missiles.

The number of officers in the nuclear corps who have been implicated in the cheating investigation has now nearly tripled.

Malmstrom is responsible for 150 Minuteman 3 nuclear missiles, or one-third of the entire Minuteman 3 force.

The Air Force also is taking a closer look at its nuclear leadership. Lt. Gen. Stephen Wilson, who heads Global Strike Command, has ordered the 20th Air Force, which oversees the Minuteman 3 missiles, to re-evaluate all senior leadership moves at the three air wings that operate the missiles. Besides Malmstrom, these missiles are kept at F.E. Warren in Wyoming and Minot in North Dakota.

It wasn't immediately clear whether the additional airmen suspected of being involved in cheating on proficiency tests are alleged to have participated in the cheating directly or were involved indirectly.

The meeting Wednesday included the heads of the Air Force and Navy nuclear weapons organizations, as well as U.S. Strategic Command, which is responsible for nuclear war planning and for oversight of the nuclear forces.

The Air Force announced on Jan. 15 that while it was investigating possible criminal drug use by some airmen, it discovered that one missile officer at Malmstrom had shared test questions with 16 other officers. It said another 17 admitted to knowing about this cheating but did not report it. The 34 officers had their security clearances suspended and they were taken off missile launch duty.

The Air Force has 450 intercontinental ballistic missiles, or ICBMs, on alert at all times, with a contingent of about 500 launch control officers, some number of which are unavailable on any given day due to illness or other reasons. So the number temporarily unavailable for duty because of the cheating scandal is substantial. It's not clear how that affects the mission, beyond requiring the remaining crew members to bear a bigger share of the work.

Each day, a total of 90 officers work in pairs inside 45 underground launch control centers, with each center monitoring and controlling a group of 10 ICBMs. They work 24-hour shifts in the missile field and then return to their base. They generally do as many as eight of these shifts per month.

The tests in question are designed to ensure proficiency by launch officers in handling "emergency war orders," which involve the classified processing of orders received through their chain of command to launch a missile. These written tests are in addition to two other types of monthly testing on the missile system and on launch codes.

Malmstrom is home to the 341st Missile Wing, which is one of three ICBM groups. The other two are in North Dakota and Wyoming.