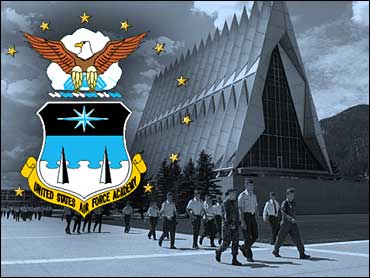 A task force will investigate the religious climate at the Air Force Academy after reports of intolerance, including incidents of anti-Semitism, officials said Tuesday.

It will assess Air Force policy and guidance when it comes to religious respect and tolerance, acting Secretary of the Air Force Michael L. Dominguez said in a statement.

The task force also will look into practices by commanders "that either enhance or detract from a climate that respects both the free exercise of religion and the establishment clauses of the First Amendment."

A preliminary assessment is due by May 23, officials said.

The creation of the task force comes after complaints that evangelical Christians wield so much influence at the school that anti-Semitism and other forms of religious harassment have become pervasive.

Last week, Americans United for Separation of Church and State sent Defense Secretary Donald H. Rumsfeld a 14-page report based on a two-month investigation. The group said it talked with about 15 cadets and staff.

The report concluded that students, faculty, staff and members of the chaplains' office frequently pressured cadets to attend chapel and receive religious instruction. Others said prayers were frequently conducted before official events.

Mikey Weinstein of Albuquerque, N.M., a 1977 graduate who has sent two sons to the school, applauded the formation of the task force. He has said his younger son has been the target of anti-Semitic comments.

"It sounds as though the Pentagon is talking the talk, and that is step one," he said. "Step two is whether they can walk the walk. There are too many afflicted by the unconstitutional evangelical control of the Air Force Academy at this point to offer any premature optimism until we see some positive, comprehensive action."

The academy said it first learned of reports of religious intolerance in a survey of cadets that included 55 complaints. Some cadets accused evangelical Christians of harassing both Christians and Jews; some of the Jewish cadets said they were blamed for the death of Jesus Christ.

The Air Force said "considerable efforts" have been made over the past several months to address issues of religious tolerance, including a new training program called Respecting the Spiritual Values of all People, or RSVP.

"This program encourages people to confidently and authentically live out their own faith and belief commitments and deeply respect others whose spiritual strength comes from a faith or source different from their own," Dominguez said. "Such mutual respect is essential to the culture of the airmen."

This is the second time the academy near Colorado Springs has been under a high-profile investigation in the past two years. Nearly 150 women came forward in 2003 to say they had been assaulted by fellow cadets in the previous decade, with many alleging that they were punished, ignored or ostracized by commanders when they spoke out.

The academy responded by overhauling the chain of command and policies involving reports of assault.