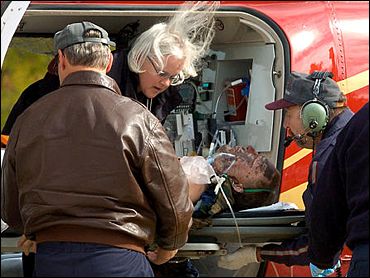 When the fog rolls into the mountains of western Montana, all a pilot can do is climb and hope nothing emerges from the clouds in his path.

This week, something did, and all five people aboard a small plane were given up for dead.

Two days after the crash, Matthew Ramige, hobbled by a broken back and severe burns, and Jodee Hogg, bruised and burned with a sprained ankle, emerged from the wilderness after spending 29 hours hiking five miles to get off the mountain west of Glacier National Park to reach a highway for help.

Today Ramige celebrates his 30th birthday in a Seattle hospital, where he is suffering from a broken back and burns.

On Sunday, Hogg attended a memorial for the three passengers who did not survive.

Michael Wilson, a friend and U.S. Forest Service supervisor of those involved in the crash, told The Early Show co-anchor Hannah Storm that Hogg's presence was "just a blessing for everyone, to see the hope that came out of this event."

He describes Hogg as "strong-willed and confident in herself - somebody that you'd expect to just take action in a situation like this."

He says Ramige is "a hard worker - a very respectful individual and a lot of fun to be with."

Hogg, 23, and were among four Forest Service workers on board the plane headed for the Big Bear-Bob Marshall Wilderness Monday to survey vegetation and fix telecommunications equipment.

But soon after takeoff, pilot Jim Long, 60, found himself caught in stormy weather. The peaks of the Rockies can be treacherous due to unpredictable winds, and a blanket of low and thick clouds makes it worse, veteran pilots say.

Long's plane was unable to clear a ridge, so he began to turn around, Hogg told a local sheriff. Without navigation aids, the clouds can become blinding.

"You can't see forward, you can't see behind you, you can't see right or left," said Robbie Holman of Whitefish, a pilot of 40 years. "So all you can do is go up. You don't do that unless things have closed in so bad you don't have any choice."

As Long began to turn, the plane hit Mt. Liebig, above the timberline at about 6,500 feet, just 15 minutes after takeoff.

The plane clipped a rock and broke into pieces, with the front portion flipping over and coming to rest upside down. By that time, the plane was on fire.

"Even before they stopped, there was fire in the aircraft," Flathead County Sheriff Jim Dupont said Hogg told him. "She recalls tremendous pressure, heat and then a flash."

At least four of the five people survived the initial impact.

But the flames were growing. Hogg opened a door, unlatched her seat belt and fell from the overturned plane onto the snowy ground. "She turns around, reaches for Matt and his foot was caught," Dupont said. "She was pulling on him and got him out."

Hogg said she checked on her friend, Davita Bryant, 32. "I saw blood in her hair and on her face and she wasn't moving," she told Dupont.

Meanwhile, Long had unbuckled Ken Good, 58, and pushed him from the plane. The fire was "just roaring" by the time Hogg, Ramige and Good had gotten out, Dupont said. Long and Bryant never did.

The three survivors, some of their clothes burned off, huddled together to share body heat that night as temperatures fell to 20 degrees. They assembled a crude shelter from pieces of the plane. They had no food, no matches for a fire, and Ramige's back injury made it difficult for him to stoop over for water from streams.

Hogg and Ramige began their walk off the mountain - they knew a highway was relatively close because the plane had been flying along the road before it crashed. They positioned the plane doors and engine cowling in the snow hoping the red stripes on the debris would draw the eye of searchers once the clouds lifted.

They also thought their footprints leading away from the site would be a sign of survivors. But by the time searchers reached the site later Tuesday, the snow had melted.

The craft had cracked into pieces and burned, leaving officials with no sign that anyone had escaped.

After 29 hours of walking, apparently in excruciating pain, Hogg and Ramige found the highway. There, a motorist who saw them left the pair, drove to the nearest phone and called for help, said paramedic Lance Westgard, one of those responding.

Westgard said Hogg wanted only to talk to her family. He recalled her saying, "They probably think I'm dead."

"Well, yeah, they do," Westgard told her.

Ramige's family was putting together his obituary, and his grandmother was making funeral arrangements.

Ramige was in serious condition Saturday at a Seattle hospital for a broken spine and severe burns. Hogg was being treated for burns and bruises at a Kalispell hospital; her family said she was in good condition.

Officials, shocked at the discovery of survivors, have struggled to explain how four people survived the initial impact of a plane crash officials had initially declared was "unsurvivable."

John Gisselbrecht, the air search coordinator for Diamond Air Search and Rescue in Kalispell, said there were indications that the crash was not so violent that no one could have survived.

"We have an issue that they declared them dead without having proof," Gisselbrecht said. "That's a serious issue. You would declare them missing until you have concrete evidence that they are dead."

Flathead County Undersheriff Chuck Curry, one of the first on the scene of the crash, said he feels "personally terrible" about erroneously telling two families their loved ones had died in the crash, and failing to look for survivors.

He said he told the families Wednesday night: "If you want to be mad at somebody, I'm your guy. I'm so sorry. I'm so happy they're alive and I'm so sorry we weren't out looking."