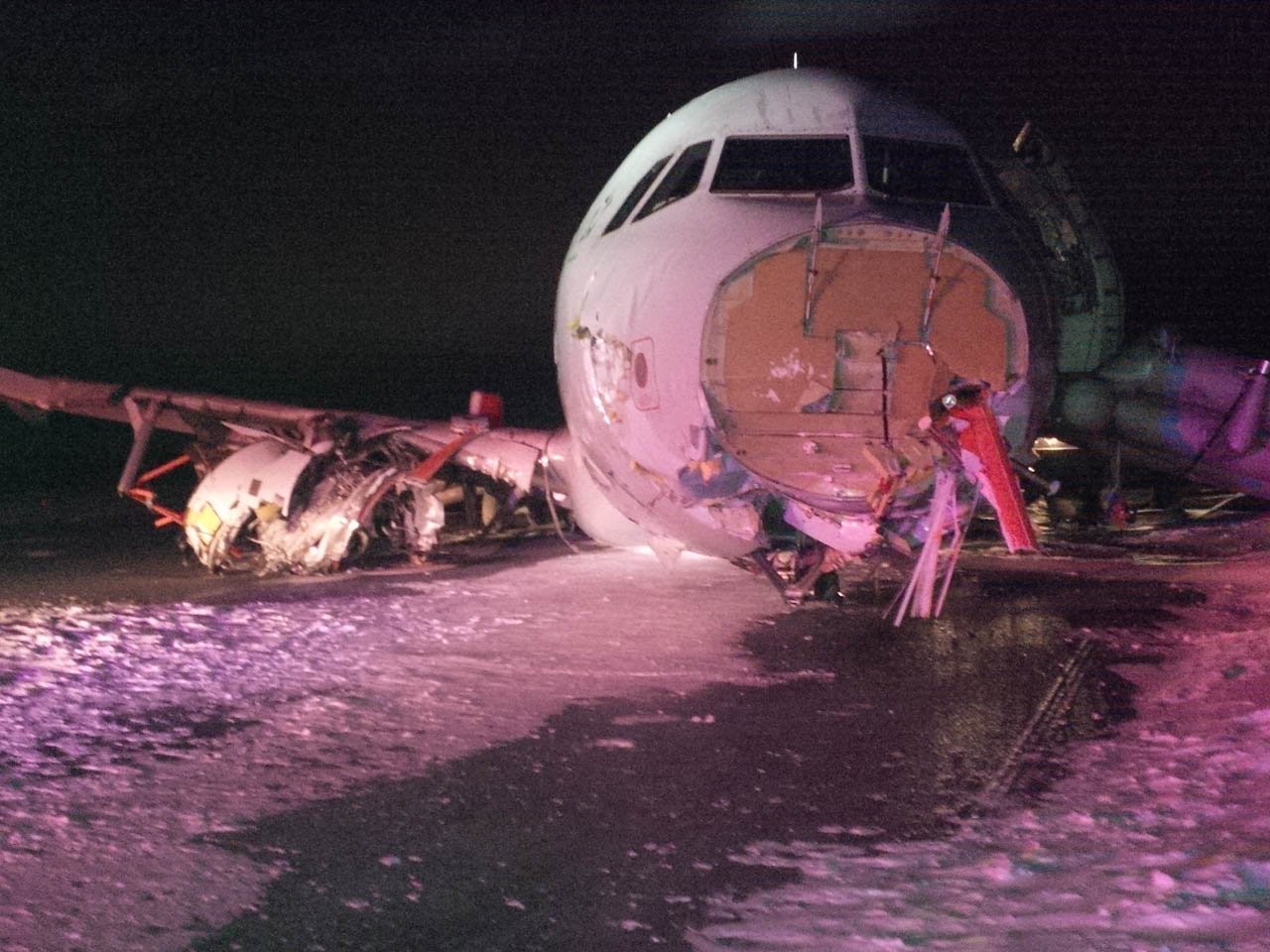 HALIFAX, Nova Scotia - An Air Canada plane made an "abrupt" landing in bad weather and skidded off the runway at the airport in Halifax, Nova Scotia, and officials said Sunday that 23 people were taken to a hospital for observation and treatment of minor injuries.

The airline said Flight AC624, an Airbus 320 that left Toronto late Saturday, had 133 passengers and five crew members. Canada's Transportation Safety Board called it an accident and provided pictures that showed significant damage to the plane with the nose torn off and what appears to be an engine crumpled under a damaged wing.

Passengers said they believe the aircraft hit a power line as it came in to land and described the plane skidding on its belly for some time before it came to a stop. Power went off at the airport, but officials didn't confirm the cause. Passengers said they left the plane immediately but were left standing on the tarmac, some in their stocking feet, for more than an hour as they were lashed by wind-whipped snow before buses arrived.

Air Canada said Sunday morning that 18 people who were taken to the hospital had been released. None of the injuries were considered life-threatening, the airline said.

"It came down pretty hard and then skidded off the runway," Spurway said. He said he didn't know whether runway conditions played a role.

The Halifax region was under a snowfall warning, with an Environment Canada alert saying, "Visibility may be suddenly reduced at times in heavy snow."

The flight crew had told passengers that conditions at the airport weren't good and they would circle for an hour to see if things improved, said passenger Dominic Stettler, 31, a father of three.

"And then there was a window of visibility and we went for it," Stettler said.

Randy Hall and his wife Lianne Clark were on their way home from a Mexican vacation when he said he believes the jet hit a power line before it landed hard on the runway. There were sparks but no fire, he said.

"We were just coming in to land and there was a big flash," said Hall. "The plane came down, bang! It jumped up in the air again."

The aircraft skidded for a long time before coming to a stop, said Hall, who is retired. "We were sliding along on our belly," he said.

Hall said the aircraft hit so hard, the landing gear and at least one of the engines were ripped from the plane.

"I was looking out and I saw the landing gear go and I saw an engine go," he said.

The couple, who were wrapped in blankets as they spoke, said they saw some people with bloody faces, but it didn't appear that anyone was seriously injured.

Mike Magnus, a businessman who was sitting in the first row, said the aircraft was at the "furthest tip of the airport" when it stopped. He says he heard that the plane may have clipped a power line that caused the power outage at the airport.

The 60-year-old Magnus added that the snow covering the runway likely deadened any sparks that might have caused the plane to catch fire.

"The snow caused it and the snow saved it," he said by telephone from Halifax.

Magnus said he was fine after being treated for minor injuries to his shoulder and jaw. "I'm safe and that's all that matters. I'm going to have a glass of wine," he said.

A spokesman for the Transportation Safety Board of Canada said investigators will likely provide an update Sunday evening.

Canadian Transport Minister Lisa Raitt thanked the first responders "for their quick and decisive action" in a statement and said the airport will review its response to the incident.