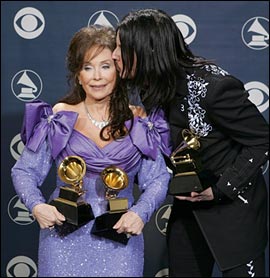 The 76-year-old country music legend has canceled a weekend appearance at the Ohio music festival because of a recent bout of dehydration from which she still is recovering.

A note on the website for the Jamboree in the Hills states Lynn was recently hospitalized for serious dehydration. A statement posted Wednesday says the singer was treated following a period of extreme heat in Tennessee, where she lives.

Lynn is quoted, saying she's sad to have to cancel any shows and that she was looking forward to seeing her fans.

Miranda Lambert, Tim McGraw and Toby Keith are among the other country music stars still are scheduled to appear at the four-day Jamboree, opening Thursday in Belmont in eastern Ohio.

Steven Spielberg To Be Knighted