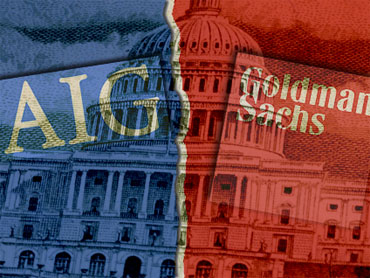 A former top executive of American International Group Inc. says he told the truth about the company's losses while defending its compensation plan.

Joseph Cassano, who led AIG's key Financial Products division, is expected to tell a special panel Wednesday that he did "my very best" to estimate the losses accurately ahead of the financial crisis, according to prepared testimony. AIG received $182 billion in bailout money.

Cassano and other executives of AIG and Goldman Sachs Group Inc. are appearing before the Financial Crisis Inquiry Commission, a bipartisan panel created by Congress to examine issues surrounding the crisis.

The hearing focuses on derivatives, the instruments at the heart of the meltdown. It will also examine the relationship between the two giant companies and the derivatives trades they made leading up to the crisis.

"I was truthful at all times about the unrealized accounting losses and did my very best to estimate them accurately," Cassano said in his prepared testimony.

It was Cassano's first public testimony since the financial crisis erupted that pushed AIG, one of the world's largest insurance companies, to the brink of collapse.

When AIG posted a loss for the fourth quarter of 2007, it pinned the blame on an $11 billion writedown related to the credit default swaps held by its Financial Products unit. If AIG couldn't make good on its promise to pay off the contracts, regulators feared the consequences would pose a threat to the whole U.S. financial system.

Cassano left AIG in 2008 shortly after the $11 billion loss was reported.

"He was at the center of this," panel chairman Phil Angelides said.

Derivatives may have been synthetic products, "but they destroyed real people's real life savings," Angelides said at the opening of Wednesday's hearing.

Derivatives have received close attention as many have blamed the complex financial products for causing the financial crisis. The value of derivatives hinges on an underlying investment or commodity - such as currency rates, oil futures or interest rates. The derivative is designed to reduce the risk of loss from the underlying asset.

After the subprime mortgage bubble burst in 2007, derivatives called credit default swaps, which insured against default of securities tied to the mortgages, collapsed. That brought the downfall of Lehman Brothers and nearly toppled AIG. New York-based AIG got an initial $85 billion infusion from the government in September 2008.

Goldman Sachs profited from its bets against the housing market before the crisis, and continued to ring up huge profits after accepting federal bailout money and other government subsidies. The firm's dealings in another type of derivative, known as collateralized debt obligations, have brought it harsh scrutiny by a Senate panel and in the case of one $2 billion CDO, civil fraud charges from the Securities and Exchange Commission. Goldman has denied any wrongdoing.

A CDO is a pool of securities, tied to mortgages or other types of debt that Wall Street firms packaged and sold to investors at the height of the housing boom. Buyers of CDOs, mostly banks, pension funds and other big investors, made money off the investments if the underlying debt was paid off. But as U.S. homeowners started falling behind on their mortgages and defaulted in droves in 2007, CDO buyers lost billions.