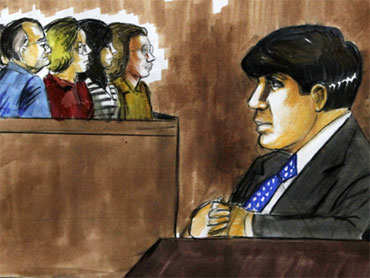 A former top aide to Rod Blagojevich testified Thursday that the then-governor said he had a deal to appoint a state legislator to Barack Obama's U.S. Senate seat in exchange for letting a veto of ethics legislation stand.

Alonzo Monk testified that Blagojevich was worried the legislation would hurt his ability to raise funds because it banned people with state contracts of $50,000 or more from donating to the campaigns of politicians who administered them.

Blagojevich, who had campaigned by saying he would bring a new era of ethics in state government, had complained the bill unfairly targeted the governor's office. It had passed both houses without a single 'no' vote before his veto.

Monk quoted Blagojevich as saying former state Senate President Emil Jones agreed to the alleged deal. But Jones called for the vote, which passed just over a month before Obama was elected president. The override vote might not have occurred had Obama not urged Jones — his mentor — to call his chamber to action.

Jones did not immediately respond to a message Thursday at his business. His cell phone was not able to accept a message.

Prosecutors began playing wiretap recordings Thursday afternoon, starting with one that includes a sometimes-agitated, audibly upset Blagojevich talking about fundraising goals with Monk. They spoke about the need to pull in contributions before the ethics law kicked in.

Monk said it was him and Blagojevich on the tape.

Blagojevich has pleaded not guilty to trying to profit from his power to fill the Senate seat and squeezing people for campaign contributions. If convicted, he could be sentenced to up to 415 years in prison, though a judge would consider many factors. Blagojevich also could face fines totaling $6 million.

The former governor's brother, Robert Blagojevich, 54, a Nashville, Tenn., businessman, has pleaded not guilty to taking part in the plot to sell the Senate seat and to scheming to illegally pressure a racetrack owner, who wanted the governor's signature on legislation involving the tracks, for campaign money.

Monk has pleaded guilty to scheming to pressure a racetrack owner for a contribution and is testifying in hopes of getting a lighter sentence.

Earlier Thursday, Monk told jurors Blagojevich drew his hand across his throat in a slashing gesture to signal that he didn't want anyone told about alleged moneymaking plans involving his power as governor.

Monk told jurors that the governor gave the signal when they were alone in his campaign office in 2007 or 2008 — indicating that if anybody asked about the alleged plans he should tell them nothing.

Monk also said Blagojevich would sometimes use his fingers to indicate the four members of an inner circle who allegedly planned moneymaking schemes.

Monk has said the group members were himself, Blagojevich and two fundraisers and were frequently referred to as "one, two, three, four." On at least one occasion, when he didn't want to speak aloud, Blagojevich held up fingers to indicate each member of the group.

Blagojevich's penchant for gesturing has become an issue at the trial.

The judge in the case warned Blagojevich earlier Thursday not to make gestures, expressions or audible sounds during testimony. Prosecutors had complained that he made sounds the day before during Monk's testimony that jurors could hear.

Monk also testified Thursday that Blagojevich fundraiser Tony Rezko, currently awaiting sentencing for fraud and other charges, slipped him as much as $90,000 in cash when he was the governor's chief of staff — typically $10,000 at a time stuffed in an envelope.

Monk said Rezko began paying him cash in 2004. At Monk's wedding, Rezko's present to Monk was $10,000 in cash and an offer to pay for a remodeling project at the newlyweds' home. Thanks to the flow of cash, which Monk kept at home, he said he never had to withdraw money from the bank or use an ATM.

But, he added, he never told Blagojevich about the money he was receiving from Rezko.

"I didn't think Blagojevich would approve of the cash payments because it would put us both in jeopardy," he told the jury.