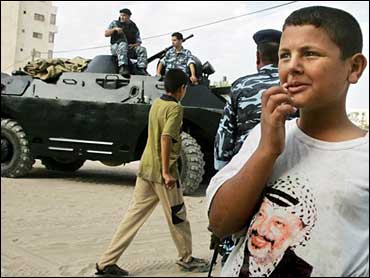 A senior aide to Yasser Arafat said early Sunday that the ailing Palestinian leader was not comatose but still in intensive care.

"He is not in a coma," Arafat's spokesman, Nabil Abu Rdeneh, told reporters after coming out of the French military hospital where Arafat has been undergoing treatment for more than a week.

He refused to say if he had seen Arafat personally or give any other details of his condition.

"He is still in the intensive care unit," he said, adding that Arafat's condition was stable.

"He is under strict medical observance. We hope that in the coming few days we will be able to know exactly what he is suffering from. So far, nobody could diagnose the situation."

On Friday, Leila Shahid, the Palestinian envoy to France, said that the 75-year-old Arafat was in a coma and "at a critical point between life and death."

Palestinian Prime Minister Ahmed Qureia, in a bid to preserve calm, made a rare visit to the Gaza Strip Saturday for talks with rival Palestinian groups.

Qureia met for four hours with representatives of the 13 major Palestinian factions, including militant groups Hamas and Islamic Jihad, as well as security chiefs, lawmakers and officials of Arafat's Fatah faction. Such a broad gathering is extremely rare.

He was accompanied on the visit by Parliament Speaker Rauhi Fattouh, who would step in as a caretaker president of the Palestinian Authority if Arafat dies.

Qureia joined the other Palestinian factions in a call for unity, hoping they could work together to ensure calm and keep the Gaza Strip from plunging into chaos if Yasser Arafat dies.

But in a sign of the challenges ahead, Hamas says that, in the transition to the post-Arafat era, it wants a formal role in Palestinian decision making, branding its call for a unified leadership an "urgent demand."

CBS News Correspondent Robert Berger, in Jerusalem, noted that, "A government role for the militants wouldn't help the stalled (Mideast) peace process. Israel would not deal with Arafat because he allegedly sponsored terrorism, and from Israel's point of view a government with Hamas and Islamic Jihad is just as bad."

Six Palestinians, including a 14-year-old boy, were killed and three Israelis were wounded Saturday in West Bank and Gaza Strip violence, the Israeli army and Palestinian sources said.

Since Arafat was flown to the French hospital in southwest Paris from the West Bank on Oct. 29, his condition has largely remained a mystery.

About 100 Arafat supporters again turned out in front of the sprawling hospital outside Paris on Saturday to show their support. They chanted "Palestine Lives!" and held portraits of Arafat and Palestinian flags. Dozens of others marched through the streets in the southern city of Marseille.

CBS News Correspondent David Hawkins points out that, "There are any number of reasons that the true nature of his condition are being kept secret, while Palestinian leaders try to make sure there's an orderly transfer of power if Arafat dies."

Arafat refused to appoint a successor and none of his possible replacements appear to have the popularity or power base to unify competing - and sometimes warring - Palestinian factions.

It seems increasingly likely that, at least transitionally, the Palestinians will be led by a collective, headed by Qureia and former Prime Minister Mahmoud Abbas, Arafat's deputy in the PLO.

As prime minister, Qureia would deal with the daily affairs of governing, while Abbas would handle diplomacy, Palestinian officials said.

Arafat's Palestinian Authority is dominated by his Fatah faction, and Hamas has been increasingly agitating to share power.

Qureia and other Palestinian officials have held a flurry of meetings with political and security officials in recent days as part of an effort to ensure an orderly transfer of power in the event Arafat dies.

They are particularly concerned about Gaza, where rival militant groups and security officials have fought in the streets, jockeying for power ahead of Israel's planned withdrawal from the coastal strip in 2005.

After the meeting, Qureia said the security commanders had committed to a "joint security plan ... to ensure security and order" and the political factions said they would work together with the Palestinian government "to reach a national program and a national plan and to achieve a political partnership."

Qureia said he was encouraged by the meeting - which focused on political issues, the shaky security situation and possible ways to share decision making - and would continue the dialogue.

The groups will meet again to discuss possibilities of a cease-fire and "restoring law and order and security control," Qureia said before returning to the West Bank.

Before the meeting, Hamas spokesman Sami Abu Zuhri also voiced calls for Palestinian unity. But in a potential challenge to Qureia, he said the crisis made his group's long-standing demand for a role in Palestinian decision-making more urgent.

"This time is very sensitive. It's a historic time. There is no space for any unilateral decisions," he said in a reference to Fatah. "Everyone now is calling for the formation of a united Palestinian leadership. This is a demand of our people."

Further complicating Qureia's efforts, Abu Zuhri also ruled out a cease-fire with Israel. "The resistance continues and will stop only if the occupation ends," he said. During his tenure, Qureia has tried to persuade militants to accept a cease-fire in hopes of restarting peace talks with Israel.

All the groups at the talks called for unity, and it was unclear whether Abu Zuhri's comments portended the beginning of a power struggle that is widely expected after Arafat's death.

Meanwhile, Israel remains determined to deny Arafat burial in Jerusalem, though Palestinian officials say such a generous gesture could go a long way toward building trust destroyed in four years of fighting.

Israel fears acceding to Arafat's request to be buried in Jerusalem's Al Aqsa Mosque would strengthen Palestinian claims to the traditionally Arab sector of the city as a future capital.

One Cabinet minister on Friday said that the holy city is reserved for the burial of Jewish kings, "not Arab terrorists."

Palestinian officials said publicly that it is inappropriate to talk about funeral arrangements as long as their 75-year-old leader clings to life at a Paris hospital.

One official said Palestinian leaders are hoping to enlist international support for a burial at the Al Aqsa Mosque compound, Islam's third-holiest shrine, which was built on the ruins of the biblical Jewish temples.

The top Muslim cleric in Jerusalem said Arafat requested burial near Al Aqsa when the two met four months ago. The comments by the mufti of Jerusalem, Ikrema Sabri, marked the first official comment on Arafat's burial wishes.

It is not clear if Arafat has left a written will, and Sabri said he was not aware of one.

The way the dispute is resolved could signal how Israel and the emerging Palestinian leadership - Prime Minister Ahmed Qureia and his predecessor, Mahmoud Abbas - will get along in the future.

Arafat is reviled by many Israelis, and seeing him interred near what is also Judaism's holiest site would draw public outrage. Israeli Justice Minister Yosef Lapid said Arafat "will not be buried in Jerusalem because Jerusalem is the city where Jewish kings are buried and not Arab terrorists."

His blunt remarks came despite Prime Minister Ariel Sharon's order to government officials to keep a low profile and avoid antagonizing the Palestinians, though Sharon himself told his Cabinet last week that he would not permit Arafat to be buried in Jerusalem.