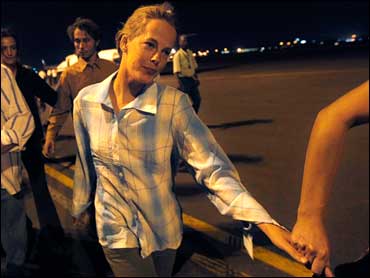 Three foreign aid workers abducted in Sudan's lawless Darfur region were released unharmed on Saturday, three days after their capture at gunpoint led international aid groups to question how they can continue to work in the area.

Sudanese television showed the Doctors Without Borders workers - a Canadian nurse, an Italian doctor and a French project coordinator - stepping off a military helicopter at El Fasher airport in North Darfur with the local governor.

"I would like to say to everybody we are safe, we are here, we are in good health," said Raphael Meunier, the French coordinator, speaking on Sudanese television. "We will be more talkative a bit later on, now our first thoughts are for our families."

The governor, Osman Kebir, said Wednesday's kidnapping was carried out by a group seeking to retaliate for the International Criminal Court arrest warrant issued against President Omar al-Bashir on charges of war crimes in Darfur.

Kebir said no ransom was paid to the group, which he said called itself the Eagles of al-Bashir.

Sudan's government threw 13 international aid agencies out of the country after the March 4 warrant, accusing them of being the court's spies. The government says it had nothing to do with the abduction and condemned it.

The Netherlands-based court accuses al-Bashir of orchestrating atrocities against civilians in Darfur, where his Arab-led government has been battling ethnic African rebels since 2003. Up to 300,000 people have been killed and 2.7 million have been driven from their homes.

Sudan denies the charges and says the figures are exaggerated.

The government warned that issuing the warrant could lead to spontaneous revenge attacks by enraged Sudanese, though it pledged to defend aid workers and diplomats in the country.

The freed aid workers were from the Belgian branch of Doctors Without Borders, also known as Medicins Sans Frontieres. The branch was not among the agencies Sudan ordered out of the country, though two other MSF operations were.

The director of the group's Belgian section said the workers' release was a relief, but he called the kidnapping a "gross violation."

"Our independent medical work must be respected if we are to continue working in conflict areas to save the lives of those who suffer most," Christopher Stokes said.

Erwin Van't Land, also of MSF in Brussels, said Wednesday the kidnapping was a "major last blow" to the Darfur aid community. "It is a very serious issue," he said, anticipating that "every aid agency is reviewing whether they can continue to work."

The group has pulled out its remaining 35 international workers, leaving behind only two staff to help with negotiations to release the hostages.

Sudanese officials said Saturday they will increase protection for aid groups operating in Darfur. Aid groups generally resist such armed protection, viewing it as a violation of their impartiality.

An officer with the U.N.-African Union peacekeeping mission said they have advised aid groups to centralize their operations in secure cities. He spoke on condition of anonymity because he is not authorized to speak to the media.

Other groups remaining in Darfur have voiced concern following the latest events - none have said they are pulling out, though there is concern individual employees could opt to leave.

"It is becoming more complicated, more uncertain, more volatile, and, for the people, more difficult to work," said Gerog Nothelle, the Africa director for the Germany-based aid group Malteser International, which operates in north Darfur.

Aid groups already had to struggle with difficult working conditions. Banditry, break-ins and carjackings against aid organizations and security harassment have long been common in Darfur, usually blamed on the many armed groups fighting in the region.

By expelling so many aid workers- 40 percent of those working in Darfur, according to the U.N. - and accusing them of being spies, experts say the Sudanese government has created a negative environment for the aid groups in hopes they will eventually be forced out.

"It is a signal that the field is open for confrontation," which encouraged the kidnapping, said Fouad Hikmat, a Sudan expert with the International Crisis Group. "You create a push factor" to drive away the remaining groups.

Senior Foreign Ministry official Ali Youssef, however, has dismissed such speculation, maintaining that "the government is determined to follow a responsible pattern of behavior."

Security considerations would mean scaling back in the remote areas of Darfur where nearly half of the 4.7 million people receiving aid reside. The aid group expulsion has already left a number of refugee camps without a single aid group to provide services.

"We are now in the business of surviving," said one aid worker speaking from Darfur. "It is hard to get much work done in this environment."

Already, some refugee camp residents are reporting deteriorating water services and the spread of infectious diseases. U.N. officials say the capacity of existing aid groups is not enough to fill the gap created by the departing groups. The government argues it can fill the gaps.