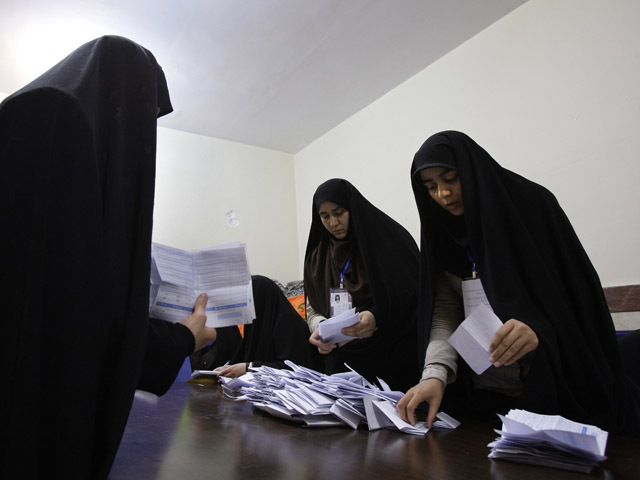 Iran has touted a robust turnout for Friday's vote as a show of support for the country's religious leadership in its confrontation with the West over the Islamic Republic's controversial nuclear program.

The result is also a new humiliation for Ahmadinejad, whose political decline started last year with his bold but failed challenge of Supreme Leader Ayatollah Ali Khamenei over the choice of intelligence chief.

While usually in agreement with the conservatives on foreign policy and many other issues, he had tried to change the rules of the political game in Iran, where the president and legislature are subordinate to religious figures like Khamenei.

Ahmadinejad's opponents had already won an outright majority in the 290-member legislature in the first round of voting in March. Of 65 seats up for grabs in Friday's runoff election, Ahmadinejad's opponents won 41 while the president's supporters got only 13 seats. Independents won 11, according to final results reported Saturday by state media.

There were no claims of irregularities — which touched off the huge protests in 2009 after accusations the results were rigged. But the ruling system vets the candidates in advance which eliminates the harshest critics.

Iran's major reformist parties, which oppose both Ahmadinejad and the conservatives, mostly did not field candidates.

The president's supporters had their best showing in the capital Tehran. Ahmadinejad's conservatives critics won 16 seats while his supporters took nine.

The new parliament will begin its sessions in late May. It has no direct control over key foreign and security policy matters like Iran's nuclear program, but it can influence those issues and economic policies as well as the run-up to the election of Ahmadinejad's successor. Ahmadinejad is constitutionally barred from seeking a third consecutive four-year term.

The results suggest Ahmadinejad will face a more belligerent parliament in the remaining time of his second four-year term in office that ends August 2013. His allies are likely to be ousted from key posts, and his plan to cut economic subsidies challenged.

No final figures were released, but Iran's media has claimed that the turnout Saturday matched that of the initial round of voting on March 2, when 64 percent of voters reportedly cast ballots.

Iranian leaders have showcased the high voter turnout as a sign of trust in the clerical-led system and rejection of Western pressure over the nuclear issue. The West suspects Iran is pursuing nuclear weapons and is demanding that Iran stop uranium enrichment. Iran has refused, saying its program is aimed at power generation and cancer treatment.

"The vote is support for the ruling system as it faces the U.S. and its allies over the nuclear program ... The vote also means that tensions will increase between Ahmadinejad and his opponents in the incoming parliament," political analyst Ali Reza Khamesian said.

Khamesian said Ahmadinejad was gradually fading from Iran's political scene but could still stir up conflict with parliament.

"Ahmadinejad is the losing party. So, he will try to create tensions in the hope of getting concessions," he said.

The outgoing parliament and Ahmadinejad are at loggerheads over how quickly to slash food and energy subsidies. The president favors dramatic cuts to boost Iran's ailing economy by reducing the massive drain on the state budget from the subsidies.

The government implemented a first phase of slashing subsidies in December 2010. Gasoline prices quadrupled and bread prices tripled after the cuts came into effect. Prices have also increased in recent months, partly as a result of sanctions over Iran's nuclear program, as well as news that the government is considering ending subsidies altogether.

Parliamentary speaker Ali Larijani, one of Ahmadinejad's opponents, said the parliament won't allow him to quickly end the remaining subsidies because it would cause wild inflation and public dissatisfaction.