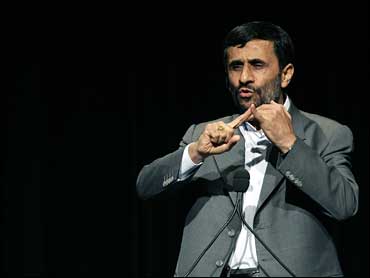 Iranian President Mahmoud Ahmadinejad questioned the official version of the Sept. 11 attacks and defended the right to cast doubt on the Holocaust in a tense appearance Monday at Columbia University, whose president accused the hard-line leader of behaving like "a petty and cruel dictator."

Ahmadinejad smiled at first but appeared increasingly agitated, decrying the "insults" and "unfriendly treatment." Columbia President Lee Bollinger and audience members took him to task over Iran's human-rights record and foreign policy, as well as Ahmadinejad's statements denying the Holocaust and calling for the disappearance of Israel.

"Mr. President, you exhibit all the signs of a petty and cruel dictator," Bollinger said, to loud applause.

He said Ahmadinejad's denial of the Holocaust might fool the illiterate and ignorant.

"When you come to a place like this it makes you simply ridiculous," Bollinger said. "The truth is that the Holocaust is the most documented event in human history."

Ahmadinejad rose, also to applause, and after a religious invocation, said Bollinger's opening was "an insult to information and the knowledge of the audience here."

"There were many insults and claims that were incorrect, regretfully," Ahmadinejad said, accusing Bollinger of falling under the influence of the hostile U.S. press and politicians. "I should not begin by being affected by this unfriendly treatment."

"Scolded and shunned at Columbia University, Ahmadinejad was conveying a message back to Iran that the West is creating the confrontation with Iran, not the other way around," said CBS News foreign affairs analyst Pamela Falk, "and he will have a few more shots at the media spotlight on the first day of the General Assembly debate, when he gives a speech and holds a press conference."

During a question and answer session Monday, Ahmadinejad appeared tense and unsmiling, in contrast to more relaxed interviews and appearances earlier in the day.

When asked if he believed the Holocaust indeed happened, his answer was classic Ahmadinejad: not a complete denial but enough to provoke, reports CBS News chief White House correspondent Jim Axelrod.

"I am not saying that it didn't happen at all," said Ahmadinejad. "This is not the judgment that I am passing here. Granted this happened, what does it have to do with the Palestinian people?"

But then he said he was defending the rights of European scholars, an apparent reference to a small number who have been prosecuted under national laws for denying or minimizing the Holocaust.

"There's nothing known as absolute," he said.

He reiterated his desire to visit ground zero to express sympathy with the victims of the Sept. 11 attacks, but then appeared to question whether al Qaeda was responsible.

"Why did this happen? What caused it? What conditions led to it?" he said. "Who truly was involved? Who was really involved and put it all together?"

Asked about executions of homosexuals in Iran, Ahmadinejad said the judiciary system executed violent criminals and high-level drug dealers, comparing them to microbes eliminated through medical treatment. Pressed specifically about punishment of homosexuals, he said: "In Iran we don't have homosexuals like in your country."

With the audience laughing derisively, he continued: "In Iran we do not have this phenomenon. I don't know who's told you that we have this."

Bollinger was strongly criticized for inviting Ahmadinejad to Columbia, and had promised tough questions in his introduction to Ahmadinejad's talk. But the strident and personal nature of his attack on the president of Iran was startling.

"You are either brazenly provocative or astonishingly uneducated," Bollinger told Ahmadinejad about the leader's Holocaust denial.

He told Fox News Channel that if Bollinger considers Ahmadinejad's visit an educational experience for Columbia students, "I guess it's OK with me."

Other American officials were less sympathetic.

On Capitol Hill, conservatives said Columbia should not have invited Ahmadinejad to speak. Senate Republican Leader Mitch McConnell, R-Ky., said "there is a world of difference between not preventing Ahmadinejad from speaking and handing a megalomaniac a megaphone and a stage to use it."

Sen. Joseph Lieberman, I-Conn., said he thought Columbia's invitation to Ahmadinejad was a mistake "because he comes literally with blood on his hands."

Thousands of people jammed two blocks of 47th Street across from the United Nations to protest Ahmadinejad's visit to New York. Organizers claimed a turnout of tens of thousands. Police did not immediately have a crowd estimate.

The speakers, most of them politicians and officials from Jewish organizations, proclaimed their support for Israel and criticized the Iranian leader for his remarks questioning the Holocaust.

"We're here today to send a message that there is never a reason to give a hatemonger an open stage," New York City Council Speaker Christine Quinn said.

At the Columbia University campus, those who supported Ahmadinejad's appearance and the right to free speech were outnumbered and out-shouted, reports CBS News national correspondent Byron Pitts. There was little patience for any difference of opinion.

And many questioned why such a prestigious university would give voice to a man who denies the Holocaust ever happened and has called for the destruction of Israel, adds Pitts.

Protesters stood near the lecture hall where Ahmadinejad was scheduled to speak, linking arms and singing traditional Jewish folk songs about peace and brotherhood, while nearby a two-person band played "You Are My Sunshine."

Signs in the crowd displayed a range of messages, including one that read "We refuse to choose between Islamic fundamentalism and American imperialism."

Tensions are high between Washington and Tehran over U.S. accusations that Iran is secretly trying to develop nuclear weapons, as well as helping Shiite militias in Iraq that target U.S. troops -- claims Iran denies.

"Well, you have to appreciate we don't need a nuclear bomb. We don't need that. What need do we have for a bomb?" Ahmadinejad said in a 60 Minutes interview that aired Sunday, taped earlier in Iran. "In political relations right now, the nuclear bomb is of no use. If it was useful it would have prevented the downfall of the Soviet Union."

He also said: "It's wrong to think that Iran and the U.S. are walking toward war. Who says so? Why should we go to war? There is no war in the offing."

Before leaving Iran, Ahmadinejad said the American people have been denied "correct information," and his visit will give them a chance to hear a different voice, the official IRNA news agency reported.

Ahmadinejad's scheduled address to the U.N. General Assembly on Tuesday will be his third time attending the New York meeting in three years.

But his request to lay a wreath at ground zero was denied by city officials and condemned by politicians who said a visit to the site of the 2001 terror attacks would violate sacred ground.