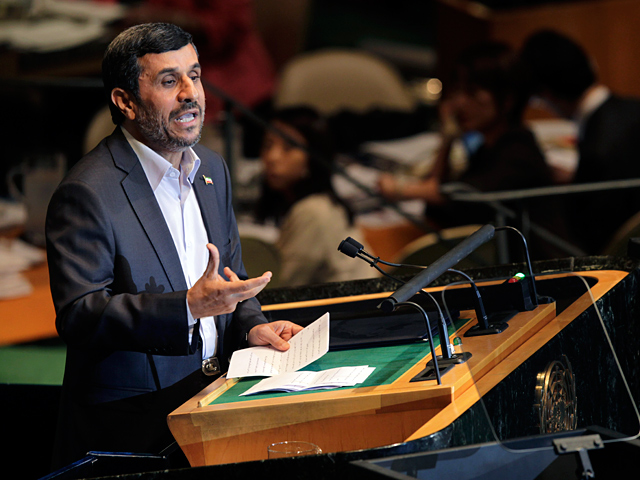 Making reference to what he called the "mysterious September 11th incident" and the "slave masters and colonial powers" of the West, Iranian President Mahmoud Ahmadinejad excoriated Western member nations in an address to the United Nations General Assembly in New York.

Ahmadinejad said after the speech that as an engineer he's sure the Twin Towers at the World Trade Center in New York were not brought down by jetliners.

Ahmadinejad, in an interview with The Associated Press, says it would have been impossible for two jetliners to bring down the towers simply by hitting them. He says some kind of planned explosion must have taken place.

The Iranian leader's appearance before the U.N. on Thursday was met with protests by groups infuriated with his past comments calling Israel a "tumor" that should be wiped off the map and suggesting that the Holocaust did not occur.

He said that the U.S. used the 9/11 attacks as a pretext for the wars in Iraq and Afghanistan, and that the wars were in fact motivated by imperialism and a thirst for oil.

"By using their imperialistic media network which is under the influence of colonialism they threaten anyone who questions the Holocaust and the September 11 event with sanctions and military actions," Ahmadinejad said in his General Assembly speech.

When the idea of an independent fact-finding investigation of "the hidden elements" involved in the Sept. 11 attacks was raised last year, he said, "my country and myself came under pressure and threat by the government of the United States."

"Instead of assigning a fact-finding team, they killed the main perpetrator and threw his body into the sea," Ahmadinejad said, referring to the U.S. military's killing of al Qaeda leader Osama bin Laden in early May.

In a frequently-seen diplomatic snub, the U.S. delegation walked out of the speech minutes after Ahmadinejad began speaking. The French representatives left shortly thereafter, when Ahmadinejad made reference to the Holocaust as a decades-old "excuse" for subservience to "Zionist" interests.

Dozens of other diplomats followed the French.

"Mr. Ahmadinejad had a chance to address his own people's aspirations for freedom and dignity, but instead he again turned to abhorrent anti-Semitic slurs and despicable conspiracy theories," said Mark Kornblau,, a spokesman for the United States Mission to the United Nations.

At a protest outside the U.N. headquarters, former U.S. envoy to the U.N. John Bolton condemned Iran but also criticized the Obama administration is doing "almost nothing" to protect Iranians from the violence of their own regime.

As Ahmadinejad was about to address the General Assembly, Bolton told The Associated Press that the United States has failed to stop Iran from torturing and killing its own people.