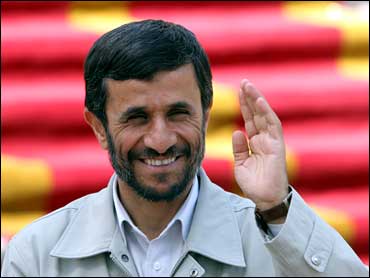 Iran's hard-line President Mahmoud Ahmadinejad urged students Tuesday to push for a purge of liberal and secular teachers from universities, in another sign of his determination to stamp a strong Islamic fundamentalist revival on the country.

Ahmadinejad's call was not a surprise — since taking office a year ago, he also has moved to replace pragmatic veterans in the government and diplomatic corps with former military commanders and inexperienced religious hard-liners.

Earlier this year, dozens of liberal university professors and teachers were sent into retirement, and last November, Ahmadinejad's administration for the first time named a cleric to head the country's oldest institution of higher education, Tehran University — drawing strong protests from students.

His administration also has launched crackdowns on independent journalists, Web sites and bloggers.

Still, the latest call was another sign that Ahmadinejad is determined to remake Iran — which still has strong moderate factions — reviving the fundamentalist goals pursued in the 1980s under the late Ayatollah Ruhollah Khomeini, father of the 1979 Islamic revolution in Iran.

His call Tuesday for a purge was, in some ways, an eerie echo from the days of the revolution.

"Today, students should shout at the president and ask why liberal and secular university lecturers are present in the universities," the official Islamic Republic News Agency quoted Ahmadinejad as saying during a meeting with a group of students.

Ahmadinejad complained that reforms in the country's universities were difficult to accomplish and that the educational system had been affected by secularism for the last 150 years. But, he added: "Such a change has begun."

It was not clear if Ahmadinejad intended to take immediate specific measures, or if he was just urging the students to rally.

The president, in his role as head of the country's Council of Cultural Revolution, would have the authority to make such changes himself. But his comments Tuesday seemed designed more to encourage hard-line students to begin a pressure campaign on their own, thus putting a squeeze on universities.

Public opinion in Iran is difficult to gauge because of a lack of independent opinion polls. But Ahmadinejad must tread carefully among various factions in Iran, and strong moderate voices remain.

Hard-liners increasingly control the top rungs of government but still encounter resistance from parts of the public. Moderates also still remain in the government. Even among conservatives, there are different goals and powerful political factions that Ahmadinejad must navigate.

It remains unclear, for example, how tightly he controls the government or the exact nature of his relationship with the country's supreme leader, Ayatollah Ali Khamenei.

It had a brief period of reform in the 1990s under then-President Mohammad Khatami — now on a visit to the United States — but hard-line factions cracked down then, too, especially on university students, dissidents and journalists.

Ahmadinejad, who won election based on promises of economic reform, has sharpened the government's stance both on human rights issues and on its controversial nuclear program.

Iran ignored a United Nations demand to suspend uranium enrichment by the end of August, insisting its nuclear program is peaceful and not intended to make a bomb. Ahmadinejad also has accused the United States of imperialism and has called for Israel to be wiped off the map.

Despite Western disgust with its confrontational positions, it seems unlikely that Iran will face tough U.N. sanctions over its nuclear program. Many European leaders have called for more negotiations, and Russia and China appear unwilling to endanger trade ties.