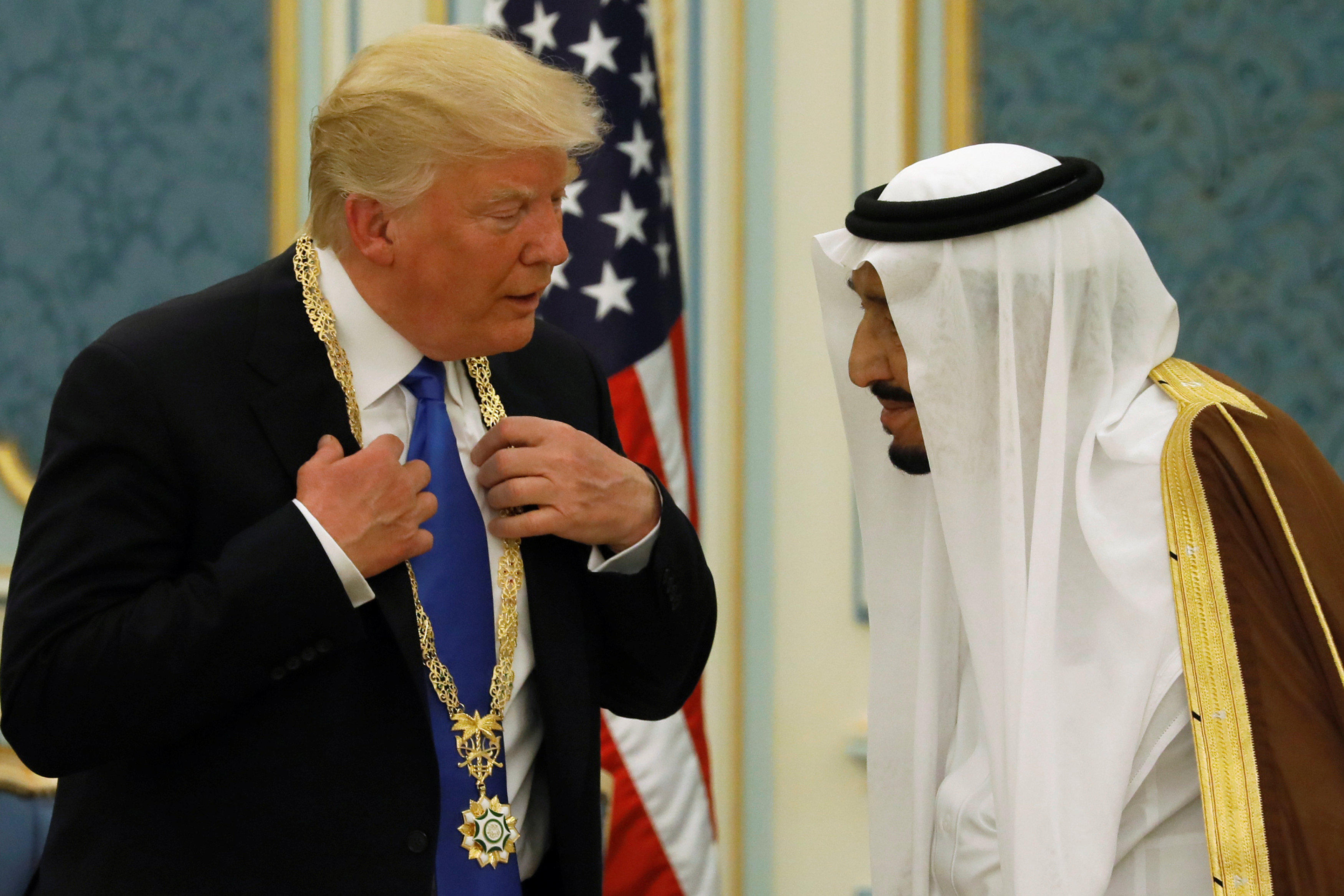 President Donald Trump's election campaign was notable for many reasons, but one that sits awkwardly with the first country he has chosen to visit as president was his tone toward Islam. Favoring fiery language and vowing to put "America first," Mr. Trump would regularly criticize his political opponents for appearing soft on terror — but moreover, his vow to ban Muslims from entering the United States both invigorated many among his base, while inflaming his critics.

His inflammatory rhetoric on Islam was backed up by two subsequent attempts to implement a travel ban affecting a small number of Muslim-majority countries, both of which were held up by legal challenges.  His language, on the trail and thereafter, has been described by those affected as deeply alienating, as many American Muslims often felt "otherized," and fissures within the American public widened.

Mr. Trump arrived in Saudi Arabia — Islam's home —  this weekend, on the first international trip of the presidency. On Sunday, he's scheduled to deliver a highly anticipated speech about radicalism to Arab leaders. And perhaps notably, the Associated Press reports that Mr. Trump's remarks — scripted by Stephen Miller who authored the travel ban — will feature a softening of his rhetoric about Islam.

Yet ahead of the speech, many of the president's past statements — made in tweets, interviews and off-the-cuff comments at campaign rallies — are being revisited.

September 2013: Before the extent of his political ambitions were fully known, Mr. Trump was accused on Twitter of "hating" Muslims. He shared a one-word retort.

March 2015: Prior to launching his presidential bid, Mr. Trump tweeted about a 2015 Texas shooting outside a contest for Prophet Mohammed cartoons in a Dallas suburb.

November 2015: At a campaign rally in Birmingham, Ala., Mr. Trump made the assertion, without evidence, that thousands of people celebrated in Jersey City, N.J. on Sept. 11, 2001. He doubled down on the claim in a subsequent interview with ABC News' George Stephanopoulos: "There were people over in New Jersey that were watching it, a heavy Arab population, that were cheering as the buildings came down. Not good."

Mr. Trump proceeded to share tweets in an attempt to bolster his argument, citing articles from Infowars -- the site run by conspiracy theorist Alex Jones.

December 2015: In what became one of the defining moments of his presidential campaign, Mr. Trump called for a "total and complete shutdown of Muslims entering the United States," a proposal that many began colloquially referring to as the "Muslim ban." The statement can no longer be found on Mr. Trump's campaign website. In it, however, he said: "there is great hatred towards Americans by large segments of the Muslim population." The complete text is below:

Donald J. Trump is calling for a total and complete shutdown of Muslims entering the United States until our country's representatives can figure out what is going on. According to Pew Research, among others, there is great hatred towards Americans by large segments of the Muslim population. Most recently, a poll from the Center for Security Policy released data showing "25% of those polled agreed that violence against Americans here in the United States is justified as a part of the global jihad" and 51% of those polled, "agreed that Muslims in America should have the choice of being governed according to Shariah." Shariah authorizes such atrocities as murder against non-believers who won't convert, beheadings and more unthinkable acts that pose great harm to Americans, especially women.

Mr. Trump stated, "Without looking at the various polling data, it is obvious to anybody the hatred is beyond comprehension. Where this hatred comes from and why we will have to determine. Until we are able to determine and understand this problem and the dangerous threat it poses, our country cannot be the victims of horrendous attacks by people that believe only in Jihad, and have no sense of reason or respect for human life. If I win the election for President, we are going to Make America Great Again." - Donald J. Trump

On the same day his proposed "Muslim ban" was unveiled, Mr. Trump publishes a tweet suggesting that there are no Muslim American sports heroes.

January 2016: Mr. Trump continues to defend his stance on Twitter, in which he criticizes former Democratic nominee Hillary Clinton's opposition to both his Muslim ban and his proposed border wall.

March 2016: In an interview with CNN's Anderson Cooper, Mr. Trump says: "I think Islam hates us. There's something there. There's a tremendous hatred there."

Later in the month, in wake of the deadly terror attack in Brussels, Belgium, he once again argues that Muslims should not be permitted to "flow in" to the United States.