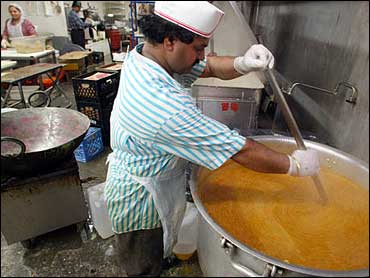 At Patel Brothers' grocery, you can almost get lost these days in the frozen food section.

Two years ago, there were three freezers in the store that caters to people from the Indian subcontinent in New York's Jackson Heights neighborhood. Now, there are 55, aisle after aisle crammed with inexpensive, ready-to-eat versions of chicken, chick peas and vegetable balls in sauces and spices.

A few blocks away at Pacific Supermarket, which specializes in Chinese and Thai food, frozen dinners fill two long aisles.

Other ethnic groceries, including those offering Mexican food, are enjoying explosive growth in sales of frozen meals to immigrant and second-generation customers with less time, inclination or ability to cook the foods of their homeland.

Filling the frozen food racks are rapidly growing food companies, many of them local or regional, which find that serving ethnic shops is easier and more profitable than selling to grocery chains. As their profits increase, they are attracting the attention of major corporations.

"In the current economy, almost everyone is working and couples cannot spend time cooking," said Amit Gandhi, vice president of Rasraj Foods, a manufacturer of frozen vegetarian entrees. "We also find that second generation Indians who don't know how to cook traditional dishes buy a lot."

The market for ethnic frozen foods reached $2.2 billion in 2001, the last year of complete figures, according to the American Frozen Food Institute.

But Mexican frozen food sales grew 20.6 percent to $488 million. Asian frozen entrees, which include Chinese, Thai and Indian, were up 12.3 percent, totaling $463 million, according to A.C. Nielsen, the market research firm.

But other Americans are also enjoying dishes once considered exotic. "The high fear factor of ethnic foods is disappearing," said Rony Zibara, director of brand innovation at FutureBrand, a consulting firm in New York.

The busy lives of many people help sales.

Six nights out of seven, it is well past midnight when Sanjay Kumar, a software manager at the brokerage firm Timberhill, arrives home from his office in Stamford, Conn.

His refrigerator is bare but his freezer is full. So Kumar, 32, dines on chicken curry, chick peas, okra cooked with tomatoes and stuffed parathas. Total cost: about $8.75.

"It takes me six minutes to have a meal ready and I spend less than 2 percent of my monthly budget on food," he said.

Ramakumar Janakiraman, a Ph.D. student at the University of Southern California, likes frozen food during busy exam periods. "I buy dishes that are too complicated to cook," he said.

Making the food are mostly small businesses closely linked to immigrant populations from Asia, Latin America and Africa. Still, some are expanding beyond their own ethnic origins. Deep Foods of Union, N.J., is adding frozen Thai and Chinese entrees even as it markets its Green Guru line of Indian dishes.

Deep Foods started out in the late 1970s as a family-owned snack business, then started making vegetarian frozen food in the mid-1980s. It has since diversified into non-vegetarian, natural and low-sodium dishes.

"I am running the business for them for three years and will launch Vietnamese and Brazilian food later this year," he said.

Heinz sees frozen dishes as a growth area along with organic and natural foods, according to Robin Teets, the company's manager of communications for North America. Just before acquiring Ethnic Gourmet, Heinz bought a Mexican food manufacturer, Delimex.

Food industry consultant Michael O'Sullivan said Europe is ahead of the United States in terms of big companies, like Nestle and Unilever, buying up smaller ethnic food manufacturers. But the trend could grow here.

"Basic frozen food has been tried and is now a bit boring," said O'Sullivan, a vice president with the consulting firm Bain and Co. "Ethnic will happen next."