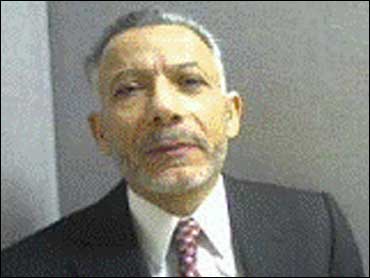 A Black September terrorist convicted of placing three powerful car bombs in New York City in 1973 has been sent to Sudan after completing his sentence and being deported by the U.S. government.

Khalid Al-Jawary, 63, was flown out of Denver International Airport on Thursday and arrived Tuesday in Khartoum, said Carl Rusnok, a U.S. Immigration and Customs Enforcement spokesman.

Details of his deportation were released to The Associated Press after Al-Jawary's federal escorts had safely left the volatile country.

Al-Jawary ended up in Sudan after Algeria initially agreed to accept him but then reversed course, setting off a scramble to find a country that would take the aging terrorist. It's unclear why Algeria decided against taking Al-Jawary.

Al-Jawary wanted to be deported to Jordan, where his family lives, but that country apparently would not allow him entry. Federal officials said he had dual citizenship with Jordan and Iraq.

Al-Jawary was released last week from the federal Supermax maximum-security prison in Florence, Colo., and placed in immigration officials' custody after serving about half of his 30-year sentence.

He was convicted in 1993 of planting the New York City bombs, which failed to detonate. He has always denied involvement in the bomb plot.

His true identity is a mystery. Al-Jawary claims his real name is Khaled Mohammed El-Jassem, and says he's a 61-year-old Palestinian refugee. The federal Bureau of Prisons had listed his age as 63.

But Al-Jawary had many aliases and was an expert in forging passports before he was finally captured in 1991 while passing through Rome, where British intelligence spotted him.

A hardened terrorist, he never cracked in prison and refused to give up information that might have shortened his time behind bars.

He once bragged in a jailhouse interview with an Arabic-language publication that he would eventually disclose his many secrets. "Some day I will leave here and say many things," he told London's Al-Majallah newspaper in 1993.

An Associated Press investigation revealed that Al-Jawary may have been involved in a murderous letter-bombing campaign and the bombing of a 1974 TWA flight that killed 88 people and may have had links to a dangerous terrorist named Abu Ibrahim, who is possibly hiding out in Iraq.

The FBI was investigating whether Al-Jawary helped carry out other terrorist attacks, but brought no charges before his deportation.