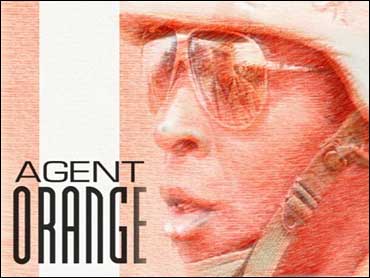 Decades after the wartime defoliant Agent Orange was sprayed over Vietnam, toxic chemicals continue to contaminate Vietnamese people and the food they eat, according to a new study released Monday.

The finding, published in the August issue of the Journal of Occupation and Environmental Medicine, found that six out of 16 food samples taken last year from around the southern city of Bien Hoa, a former U.S. air base, had levels of dioxin approaching those found during the Vietnam War.

Dioxin was found in ducks, chickens, a bottom-dwelling fish and a toad. Samples of pork and beef showed negligible levels.

"This study is one of many that shows Agent Orange is not history. Dioxin contamination is still found in high levels in some Vietnamese, as high as when spraying was going on," said lead researcher Dr. Arnold Schecter, of the University of Texas School of Public Health in Dallas.

During the Vietnam War, the U.S. military sprayed an estimated 21 million gallons of herbicides over central and southern Vietnam to destroy jungles communist forces used as cover. About 55 percent of that was Agent Orange, which contains the highly toxic dioxin.

Bien Hoa was the site of a 5,000-gallon underground spill of Agent Orange about three decades ago.

Earlier studies have shown high dioxin levels in the bloodstream of residents of Bien Hoa, located 20 miles northeast of Ho Chi Minh City, including children born decades after the spraying and people who recently moved there.

Though there has never been a direct scientific connection established between the herbicide and birth defects, exposure to Agent Orange has been linked to a variety of illnesses, including cancer, diabetes and spina bifida.

Schecter, who worked with a team of Vietnamese, German and American scientists, said the study also showed the presence of other dangerous chemicals, including PCBs, a dioxin-like substance.

"When we worry about the health effects in people, we shouldn't ignore the presence of these other chemicals," he said.

Schecter said he believes measures can be taken to avoid future contamination, including urging people to substitute contaminated foods with other food sources.

"There are things that can be done here. The good news is that even in Bien Hoa city, most of the food is safe," he said.

Although Vietnam has never directly demanded compensation from the United States, it has said Washington has a moral responsibility to help heal the consequences of the war. Last year, the two countries held their first joint scientific conference on Agent Orange and its effects.

Vietnam says there are more than 620,000 victims affected by Agent Orange, including veterans and their children.

Little trace of dioxin remains in the soil. However, dioxin can be found in sediment, which may be one reason fish and ducks are more likely to be contaminated.