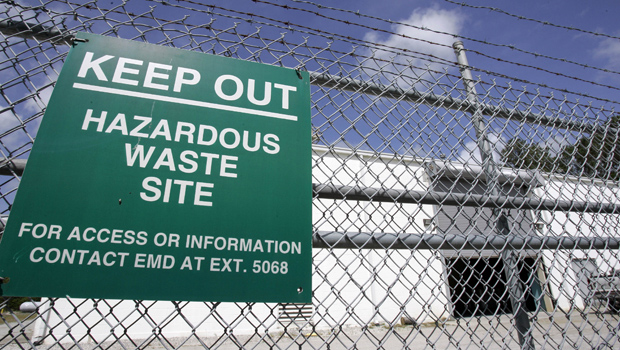 RALEIGH, N.C. Many more Marines and their relatives could be eligible for compensation for illnesses now that a federal agency determined that the water at North Carolina's Camp Lejeune was contaminated four years earlier than previously thought.

In a letter to the Department of Veterans Affairs, the Agency for Toxic Substances and Disease Registry said computer modeling shows that drinking water in the residential Hadnot Point area was unsafe for human consumption as far back as 1953. President Barack Obama signed a law last year granting health care and screening to Marines and their dependents on the base between 1957 and 1987.

"This is yet another piece of the puzzle that's coming together and slowly exposing the extent of the contamination at Camp Lejeune — and the Marine Corps' culpability and negligence," said Mike Partain, a Marine's son who was born at the southeast North Carolina base and who says he is one of at least 82 men diagnosed with breast cancer. "This is four years overdue."

The Marines were slow to react after groundwater sampling first showed contamination on the base in the early 1980s. Some drinking water wells were closed in 1984 and 1985, after further testing confirmed contamination from leaking fuel tanks and an off-base dry cleaner.

Health officials believe as many as 1 million people may have been exposed to tainted water. It's not clear how many Marines and family members will be affected by the expansion of the time line, bu Partain estimates thousands.

In a letter to Gen. Allison Hickey, VA undersecretary for benefits, the head of the toxic substance registry noted that a preliminary water modeling report showed that the period covered under the 2012 legislation didn't go back far enough, and that volatile organic compounds exceeded maximum contaminant levels at Hadnot Point as early as August 1953.

"I hope this information is useful as the Department of Veterans Affairs evaluates claims from veterans who served at USMC Camp Lejeune prior to the release of our full water modeling report in the spring," agency Director Christopher J. Portier wrote in the letter, dated Wednesday.

The letter was first released publicly during a meeting Thursday of the agency's community assistance panel at the disease registry headquarters in Atlanta. Former Marines and family members angrily questioned officials about why these studies have taken so long to complete.

Marine Corps Capt. Kendra Motz said she got the disease registry letter Thursday. She didn't have immediate comment on it. A VA spokesman said that agency was looking into the letter.

Former Master Sgt. Jerry Ensminger singled out the case of a Florida Marine who is dying of a rare case of male breast cancer, and whose claim the VA recently denied.

"We've got veterans out there with life-ending diseases," said Ensminger, who blames the contamination for the leukemia that killed his 9-year-old daughter, Janey, in 1985. "These people are terminal, and they need this information."

That veteran, Tom Gervasi, 76, had his left breast removed in 2003. His service at Camp Lejeune ended six months before the cutoff date.

The VA has denied his cancer claim twice. He learned of the most recent rejection on Wednesday in a call from U.S. Sen. Marco Rubio's office.

Gervasi's doctors have given him at most three years to live. He would like his wife, Elaine, to have VA benefits when he is gone.

"Hopefully, this will work in my favor," Gervasi said in a telephone interview Friday from his home in Sarasota. "I don't know. It's sort of like fighting city hall, so to speak. When you're fighting the federal government, you're not always going to win. Very seldom you're going to win."

"It is my hope that VA will act quickly to amend their policy and review relevant disability claims that have been denied," U.S. Sen. Richard Burr said in a prepared statement. "These men and women have been suffering through no fault of their own and we owe them the care they need without delay."