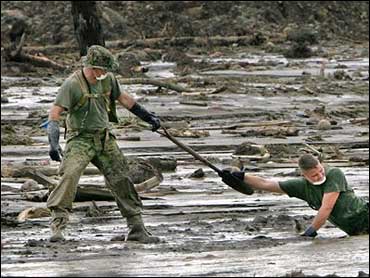 The racket fell softly from Andre Agassi's hand, his face froze in a look of shock and tears flooded his eyes.

Agassi cried more Sunday than Steffi Graf did when she won the women's title the day before. But he cried for the same reason: a victory that meant far more than simply another championship.

He had salvaged a career in tatters and emerged from a marriage in ruins. Embarrassed and nearly beaten in the final, Agassi sprang back with a vengeance.

Always resilient, always surprising, but rarely so emotional, Agassi burst into tears as the impact of those personal and professional triumphs washed over him the instant he won the title.

"I felt numb," Agassi said. "There are so many reasons I have to be overwhelmed at that particular moment. This is certainly the greatest feeling that I've ever had on the tennis court. It's almost like it was just sheer destiny."

In that moment, when he had come back from two sets down to beat Medvedev, Agassi secured a place in tennis history that not even Pete Sampras, Bjorn Borg, John McEnroe or Jimmy Connors can claim.

As proof of his versatility, he is the first to do it on three different surfaces. When Don Budge, Fred Perry, Rod Laver and Roy Emerson accomplished the feat, all the majors except the French were played on grass.

"To be assigned a place with some of the game's greatest players is an honor I'll have the rest of my life," the 29-year-old Agassi said. "I can't believe I can join that company."

Fittingly, Agassi received the silver winner's trophy from Laver, who twice won the Grand Slam in the same year 1962 and 1969.

Agassi, who will rise from No. 14 to No 4 in the rankings, came perilously close to blowing his great chance against Medvedev. The pressure wore on him before the match, he said, and he came out flailing haplessly while Medvedev pounded aces and winners.

"I was trying to move, and my legs weren't going," Agassi said. "It was a very, very scary feeling out there."

The first set rushed by in 19 minutes, Agassi taking only six points in the six games he lost. The second set, interrupted by a 25-minute rain delay, lasted only a little longer.

They played those sets in a 63-degree chill, with winds gusting up to 30 mph. Medvedev, a 24-year-old from the Ukraine, didn't seem to mind. Agassi appeared to have no idea what to do.

"I was in shock," Agassi said. "I was embarrassed, actually, real diappointed with the fact that the finals was potentially a blowout. At that point, I was just trying to stay alive and hope that something good could happen."

Rain fell again in the middle of the third set, but play continued and the set was tied at 4-4 when everything changed. Faced with a break point after double-faulting to 30-40, Agassi struck a volley winner.

Suddenly, the sun came out, the wind died down, and Agassi was in control. He held serve, broke Medvedev, and pumped his fist. The comeback was on. This was the fourth match Agassi had trailed this tournament, and he knew exactly what he had to do.

Agassi stepped up the pressure on Medvedev, keeping the ball deep, booming returns, winning the first three games of the fourth set and cruising the rest of the set to tie the match.

In the fifth set, though Medvedev would run his ace count to 23, Agassi broke for a 3-2 lead that he never relinquished.

The fans, who had been chanting "A-gass-eee, A-gass-eee" most of the match, never turned nastily on Medvedev as they did on Martina Hingis in her loss to Graf. Instead, as Medvedev fought with courage and composure to stay in the match, the fans struck up a wonderful tribute to both players, chanting their names alternately before Agassi served out the final game.

When Medvedev's last forehand sailed long, Agassi tossed his racket down, buried his head in his hands, and wept unabashedly. He then turned to Medvedev and embraced him in a warm hug.

The level of play the last three sets was so high, the comeback so dramatic, the victory so historic that even McEnroe, commenting on the match for television, said he was speechless.

For Medvedev, there was no shame in losing, no reason to feel he hadn't done everything he could.

"I don't have regrets," said Medvedev, whose ranking will jump from No. 100 to the mid 20s. "As a competitor, I'm disappointed that I came up short, but I came up short to a great player."

"He has a right to say now that he's a greater player than, let's say, Pete (Sampras) by winning all four Grand Slams. It's an argument that he can have."

Agassi came close to quitting tennis a few years ago, unsure whether he still had the passion to play, the intensity to train, the willingness to travel week after week on the tour. He skipped most of 1997 after marrying actress Brooke Shields in April that year, and by November his ranking sank to No. 141.

Agassi spent more time at Hollywood gatherings than he did on the courts during that stretch. Like a baseball ballplayer going down to the minors to see if he has anything left, Agassi took a couple of wildcards on the Challenger circuit.

He began a sputtering comeback a few months later, getting back into the top 10 in 1998, but failing to make much of a dent at the majors.

All that changed with this French Open, which started just a month after Agassi and Sields filed for divorce. With the problems of his marriage behind him, Agassi acknowledged that his mind was clear now to concentrate on his tennis career once again.

"I certainly know I have a lot more tennis in me," Agassi said. "It's been 25 years or so since somebody has won the French and Wimbledon in the same year. That would be something."