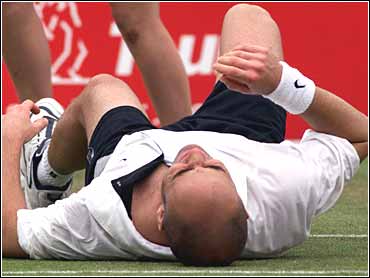 Andre Agassi's preparations for Wimbledon were jolted Thursday when he injured his back at the Queen's Club tournament and was forced to withdraw.

Agassi slipped and fell heavily while chasing a shot early in the second set of his third-round match against Italy's Gianluca Pozzi.

After playing another game, Agassi took a three-minute injury timeout as tournament trainer Doug Spreen rubbed his lower back and stretched his left leg.

Agassi, looking uncomfortable, came out for the next game. Limping visibly, he lost the game.

Agassi then walked off the court, slammed his racket in anger against his foot, and extended his hand to Pozzi as he forfeited the match.

Agassi and Spreen described the injury as lower back spasms.

Spreen said Agassi would receive treatment for the next few days but should be able to resume practice shortly and be ready for Wimbledon, which begins June 26.

"He bruised his lower back and that caused the muscles to go into spasm and cause a great deal of pain," Spreen said. "He has been evaluated and he's going to be sore for a couple of days but there doesn't appear to be any real damage. In two or three days it'll probably be feeling a lot better.

"I would expect him to be fully fit for Wimbledon. That's our outlook right now. There'll be no reason for him to even think about hitting balls tomorrow or probably the next day. You just go on a day-to-day basis."

Agassi said he felt a "significant sharp pain" when he fell.

"There was no ability to really rotate or move at that point, and the risk of damaging something more wasn't in my game plan at this stage," he said. "I'm in Doug's hands. I'll be treated with a high dosage of ice and some manipulation."

Agassi said he would not consider going home for treatment.

"For me to be fit for Wimbledon, from a health standpoint, I'm going to address it right here," he said. "While this is not ideal (preparation), at some stage you've got to play your highest card and take my chances. I'll try to bluff my way through a few matches and hopefully feel good."

Agassi had won the first set 6-4 and the score was 2-2 in the second when he retired.

The top-seed was in control of the match when the slip occurred at 1-1 in the second set. Running full speed toward the net for a lunging forehand get, his left leg slipped from under him on the grass and he tumbled awkwardly to the turf.

Agassi's shot proved to be a winner down the line, giving him a service break and a 2-1 lead. He stayed down for several minutes with his head buried in the grass, while Pozzi came around the net to offer assistance.

Agassi rose and walked slowly back to his chair, spending much of te changeover wincing in pain. When the match resumed, he clearly looked in difficulty and dropped his serve.

Agassi then called for the trainer. He lay face down on a towel while Spreen treated his back, then flipped over as the trainer worked on his leg.

Agassi went out for the next game, but made little effort as Pozzi held serve.

Agassi broke his racket when he slammed it against his right foot, drawing a code violation from the chair umpire.

Agassi, Wimbledon champion in 1992, runner-up last year and the only player in the modern era to win all four Grand Slams, was coming off a second-round loss at the French Open to Karol Kucera. Hobbled by a foot blister, he won only two games in the final two sets.

Agassi took a late wild card for Queen's to prepare for Wimbledon.

In his first match on grass in a year, Agassi struggled to beat France's Anthony Dupuis in three sets Wednesday.