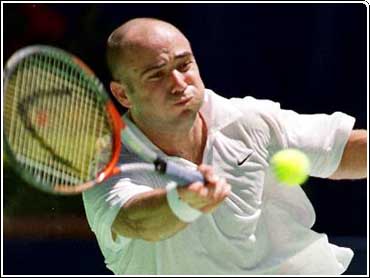 A year after being defaulted in the second round for repeatedly cursing at a linesman, Andre Agassi never even made it that far this time at the Sybase Open.

Agassi, scheduled to play his first match in the United States in nearly five months on Wednesday night, pulled out of the tournament late Tuesday night with a lower back strain.

The withdrawal of the No. 1 Agassi left defending champion Mark Philippoussis as the top remaining seeded player at No. 2. Philippoussis, ranked 17th in the world, was the only top 40 player left in the $350,000 tournament.

Agassi had arrived in San Jose after a tough nine days of world travel. He won the Australian Open title on Jan. 30 in Melbourne, then flew to southern Africa to help the U.S. Davis Cup team win its first-round match against Zimbabwe.

Agassi won two matches in that first-round series last weekend despite altitude sickness and dehydration that caused him to vomit into a courtside trash can during his second victory.

He assured Sybase Open and ATP Tour officials Monday that he would be playing in the tournament, which was to have been his first in the United States since winning the U.S. Open title last September.

But Agassi called tournament director Barry MacKay after a practice session in San Francisco on Tuesday to say complications from a minor back injury during his semifinal match against Pete Sampras at the Australian Open were forcing him to pull out of the Sybase event.

"He said he started getting cramps on the flight from Zimbabwe to London," MacKay said. "Then on the flight to San Francisco, it started to get worse. He tried to work out, but could barely move."

It was at the 1998 Sybase Open that Agassi defeated No. 1 Sampras in the final, an early step in his comeback from being ranked as low as 141st in the world. Agassi has been No. 1 since winning the U.S. Open last September.