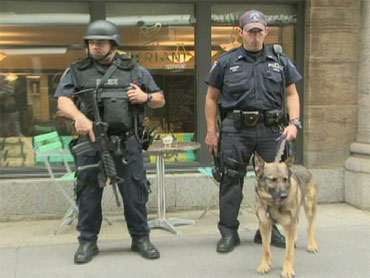 In New York Tuesday, security was noticeably tight as world leaders gathered at the United Nations and the investigation continued into what officials believe was a plot to attack the city.

As police and FBI worked to unravel a possible terror plot, CBS News has learned that the hunt is on to see if terrorists have stored a cache of explosives somewhere in New York City. In an exclusive interview with "60 Minutes", Attorney General Eric Holder told correspondent Steve Kroft just how urgent the threat was.

"I think we've disrupted that which they've planned and it's not totally clear to us at this point what it is they had in mind, though I think it is clear that something very serious and something very organized was under way," Holder said.

In searching for answers, investigators hit more apartments and storage facilities in the borough of Queens, part a still-expanding probe to identify those connected with the prime suspect in the case, Najibullah Zazi, the 24-year-old Afghan native now in jail in Colorado.

In New York, the NYPD's "Hercules Teams" - heavily-armed squads - were making their presence known on city streets as more than 150 world leaders poured into the city for the opening session of the U.N. General Assembly Wednesday.

"Our operating premise is that the city is the top of the terrorist target list," said New York Police Commissioner Ray Kelly. "That there are always those people that want to come here and hurt us."

While no specific terrorist plot has been identified, the Department of Homeland has been issuing bulletins to transit systems, hotels and sports stadiums over the past few days, urging them to raise their awareness and readiness.

"I think you're going to see a general heightening of security in a variety of areas," Holder said.

There were no new arrests Tuesday in the terror probe, but sources tell CBS News that up to a dozen people continue to be closely monitored by the FBI.