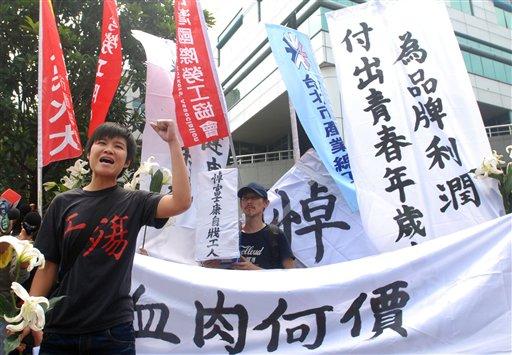 The Taiwanese electronics company buffeted by a spate of suicides at its China factories said Friday it will raise the pay of workers by an average of 20 percent.

The pay raises at Foxconn Technology Group have been in the works for months to cope with a labor shortage following China's recovery from the global recession, said a company official speaking on condition of anonymity because he was not authorized to talk to the press.

But the official said the big jump in pay could help to lift worker morale. "Feeling sad is contagious, and so is feeling happy," he said. "We hope the workers will have a positive attitude toward their lives."

The basic salary at the China plants of Foxconn Technology Group - which makes iPhones and other popular gadgets - is currently about 900 yuan ($130) per month.

Ten workers have killed themselves and three have attempted suicide at Foxconn's operations in southern China this year, involving mainly workers who jumped from buildings. The most recent suicide attempt involved a 25-year-old man who slashed his wrists in the factory dormitory Thursday. One additional Foxconn worker in northern China also committed suicide this year.

Labor activists accuse the company of having a rigid management style, an excessively fast assembly line and forced overwork. Foxconn denies the allegations.

The Foxconn chairman showed off a motherboard factory, hot line center and even a swimming pool for employees. The walled-in industrial park, where 300,000 people work, looks like a small city, with palm tree-lined streets, fast-food restaurants, banks and a bookstore among huge factory buildings and towering dormitories.

Gou said the company would do everything possible to prevent more deaths. Safety nets were being installed on buildings and more counselors were being hired. He also said all employees were being divided into 50-member groups, whose members would watch for signs of emotional trouble within their group.