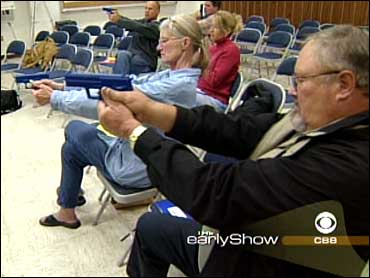 Clark Aposhian is running his first gun training class exclusively for teachers. Although turnout was sparse, the pupils were enthusiastic.

"We stick our heads in the sand when it comes to ability to protect ourselves," Aposhian told The Early Show correspondent Hattie Kauffman.

Holes in student safety were brought to the forefront after three fatal school shootings in the past few weeks. The deadliest was at the one-room Amish school house in Pennsylvania, where five school girls were killed.

The teachers in Aposhian's class are training to get licensed to carry a gun to school. They feel having a gun in the classroom will help them should a threat arise.

"If someone's going to get into this school and harm the kids, there needs to be an immediate and deadly response," said Nick Pond, a teacher. "That could be an amazing deterrence to anyone who wants to harm kids."

"When I walk in there, that class is mine and I would do anything to keep from one of those children getting armed," teacher David Westley said.

Aposhian said that experience has taught us that having unarmed teachers has not produced good results.

"We'll never know if in Baley or Pennsylvania or Red Lake, Minn., if a firearm discreetly carried by a teacher or an administrator or custodian would have stopped these shootings, if it would have saved any lives at all," he said. "However, we can tell you with absolute certainty what happened when no firearms were carried by teachers."

President of the Utah Education Association Kim Campbell is critical of having armed teachers. She said she cannot think of any circumstance where teachers should carry guns in school.

"I would be opposed to any guns in school, period," she said. "No matter where I would put a gun in a classroom, a class full of little people would find it. And if it were locked up safely, there would be no chance to get it."

Others say that while guns may not be the answer, kids and teachers need to fight back even if it's with pens, pencils and textbooks. Greg Crane, a former police officer, teaches a class on how students and teachers can defend against an attack with his program called Response Options. He tells his students to use everything they have available to fight back.