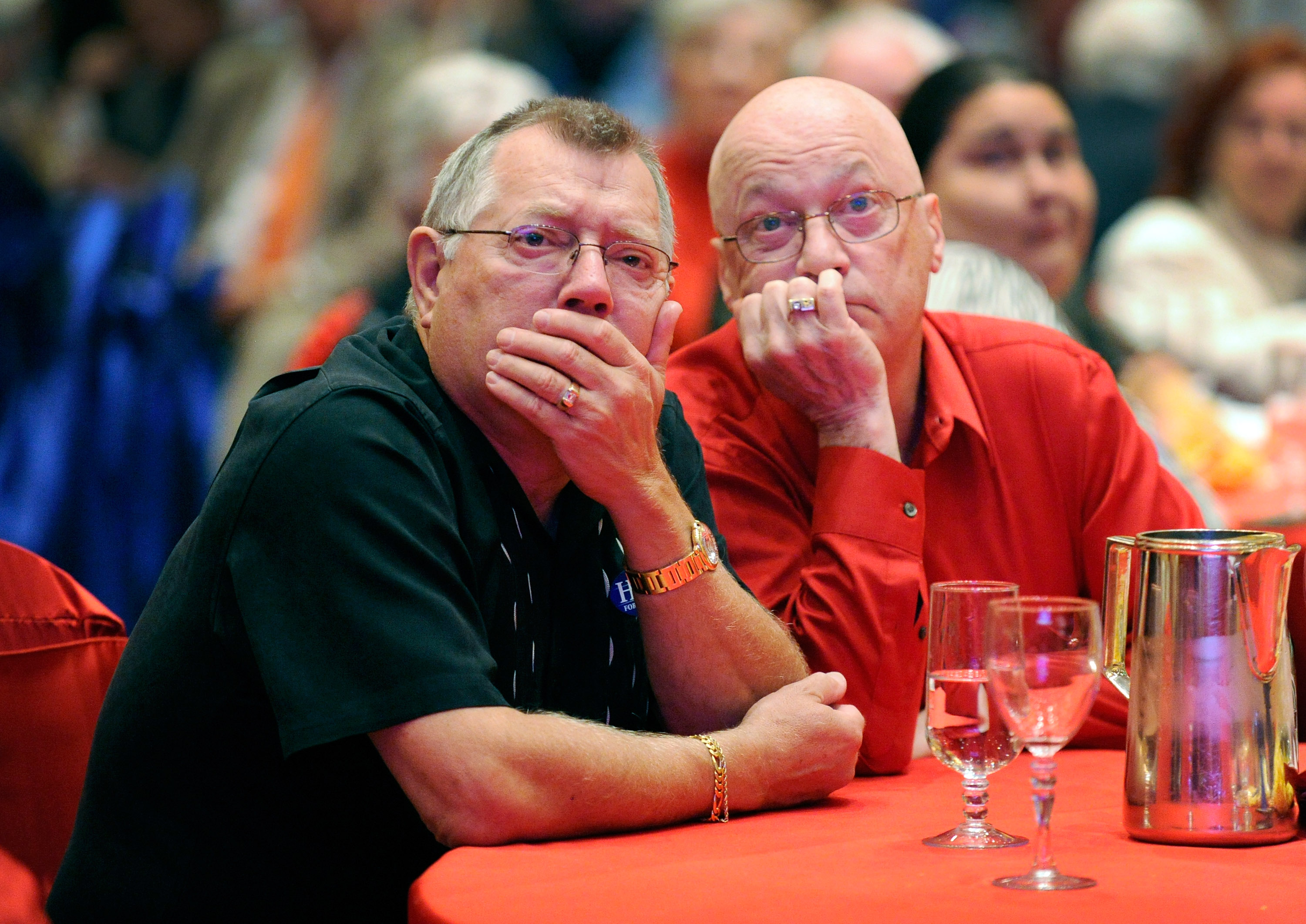 Mitt Romney's loss on Tuesday laid bare a Republican demographic problem that, if not addressed, could transform the GOP into a permanent minority party.

Romney dominated among white voters, who made up 72 percent of the electorate: He won that group by 20 percentage points, according to the national exit poll. But he was crushed among Latinos, who broke for President Obama 71 percent to 27 percent.

The former group is shrinking as a portion of the electorate. In 1988, they were 85 percent of all voters. By the year 2000, that was down to 81 percent. It's fallen nine more points since them. The Latino population, meanwhile, is growing at a staggering pace: Latinos accounted for more than half of the U.S. population increase between 2000 and 2010, according to the 2010 census. The black and Asian vote, which also broke overwhelmingly for the president, is also growing. Blacks were 13 percent of the electorate this year, up from 10 percent in 1988; Asians have risen from one percent of the electorate to three percent over the past two decades.

It's a demographic reality that already has some Republicans calling for a new course in the wake of Romney's defeat.

"The conservative movement should have particular appeal to people in minority and immigrant communities who are trying to make it, and Republicans need to work harder than ever to communicate our beliefs to them," said Florida Sen. Marco Rubio.

On "CBS This Morning" today, newly-elected Texas Republican Sen. Ted Cruz argued that "the values in the Hispanic community are fundamentally conservative, but you've got to have candidates that connect with that community in a real and genuine way and communicate that the values between the candidate and the community are one and the same."

Romney's weakness among Latinos cost him dearly in the battleground states of Nevada, Colorado, Virginia and Florida; if future Republican candidates don't perform better among that group, red states like Arizona and even Texas are on a path to become battlegrounds themselves.

"Immigration has caused the Republican Party to leave votes on the table," Gary Segura of Latino Decisions said Wednesday. Pointing to the president's margin of victory, he argued that "For the first time in American history, the Latino vote can plausibly claim to be nationally decisive."

The GOP's demographic problems don't just break down along racial lines. Voters under 30 supported the president 60 percent to 37 percent, and voters between 30 and 44 years old backed Mr. Obama by seven percentage points. Some of these voters may become more conservative as they grow older. But rapidly shifting views suggest they almost certainly will not embrace the GOP's opposition to same-sex marriage. And young women, who overwhelmingly backed the president, will most likely continue to oppose Republicans when it comes to access to contraceptive health care coverage and abortion rights. Al Cardenas, the head of the American Conservative Union, bluntly told Politico that his party "needs to realize that it's too old and too white and too male and it needs to figure out how to catch up with the demographics of the country before it's too late."

The question now facing Republicans is whether they shift toward the middle or instead try to appeal to growing demographic groups while staying planted firmly on the right side of the political spectrum. There are those who will look at the past two presidential cycles, in which relatively moderate Republican nominees fell short, and conclude that the party needs to nominate a true believer willing to stand behind core conservative principles. Rubio, who is already being discussed as a leading 2016 presidential contender, is the kind of candidate that could energize those who want to reach out to new types of voters without abandoning the party's beliefs.

John Hudak of the Brookings Institution argues that the best past forward for the GOP is to move - slowly - toward positions that hold appeal for groups that voted for Mr. Obama this year.

"If they move too quickly to the middle, it's going to alienate a lot of people in their party," he said. Fifty-nine percent of voters in the exit poll said abortion should be legal, but if Republicans suddenly embrace abortion rights, evangelicals and values voters could abandon the GOP. If they shift leftward too quickly on fiscal issues, it could prompt Tea Partiers and libertarians to do the same.

"That's the first step to neutralizing these social issues," he said. "It's not to change your mind. It's just to not speak your mind. And that way people can think this isn't that aggressive party anymore, and it opens the door for them to vote for you based on other issues."

"It's definitely a challenge," Hudak added, "but I don't think it's insurmountable."