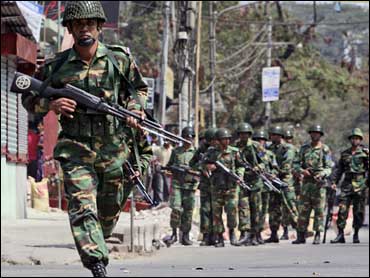 Bangladesh blocked access to the video-sharing site YouTube after it hosted a recording of a tense meeting between the prime minister and army officials following a bloody mutiny by border guards, officials said Monday.

The insurrection last month claimed more than 70 lives, shook the two-month-old government of Prime Minister Sheikh Hasina and raised tensions with the powerful military, which opposed her handling of the incident.

YouTube "has been temporarily blocked in the national interest," said Abbas Faruq, a spokesman for the government's regulatory body that oversees the Internet, the Bangladesh Telecommunication Regulatory Commission.

Faruq said gateway access to a few other Web sites, like esnips.com, were also being blocked. He would not say when the sites would be unblocked.

"The government can take any decision to stop any activity that threatens national unity and integrity," Ahmed said, according to the online news service bdnews24.com.

The audio clip recorded Hasina defending her decision to negotiate with the mutineers while army officials shouted and jeered, drowning her out and preventing her from speaking.

The clip was being posted on blogs and overseas Web sites that cater to Bangladeshis.

Nasrin Sultana, a manager at Access Telecom Bangladesh Limited, one of the country's major Internet providers, said the site was blocked late Sunday because of an audio clip from the March 1 meeting. Officials at Google Inc., YouTube's parent company, could not be immediately reached for comment.

Military officials and others with knowledge of the meeting said the gathering was tense.

The Feb. 26-27 revolt at the Dhaka headquarters of the Bangladesh Rifles, a paramilitary border patrol force commanded by army officers, left senior army officials furious at Hasina for negotiating with the mutineers instead of ordering an army attack.

The mutiny ended through negotiations, with offers of amnesty and a show of military force. But when dozens of bodies - including those of 56 commanding officers - were discovered dumped into shallow graves or sewers on the sprawling compound, the government rescinded the amnesty for those behind the mutiny. Four other army officers are still reported missing, and presumed dead.