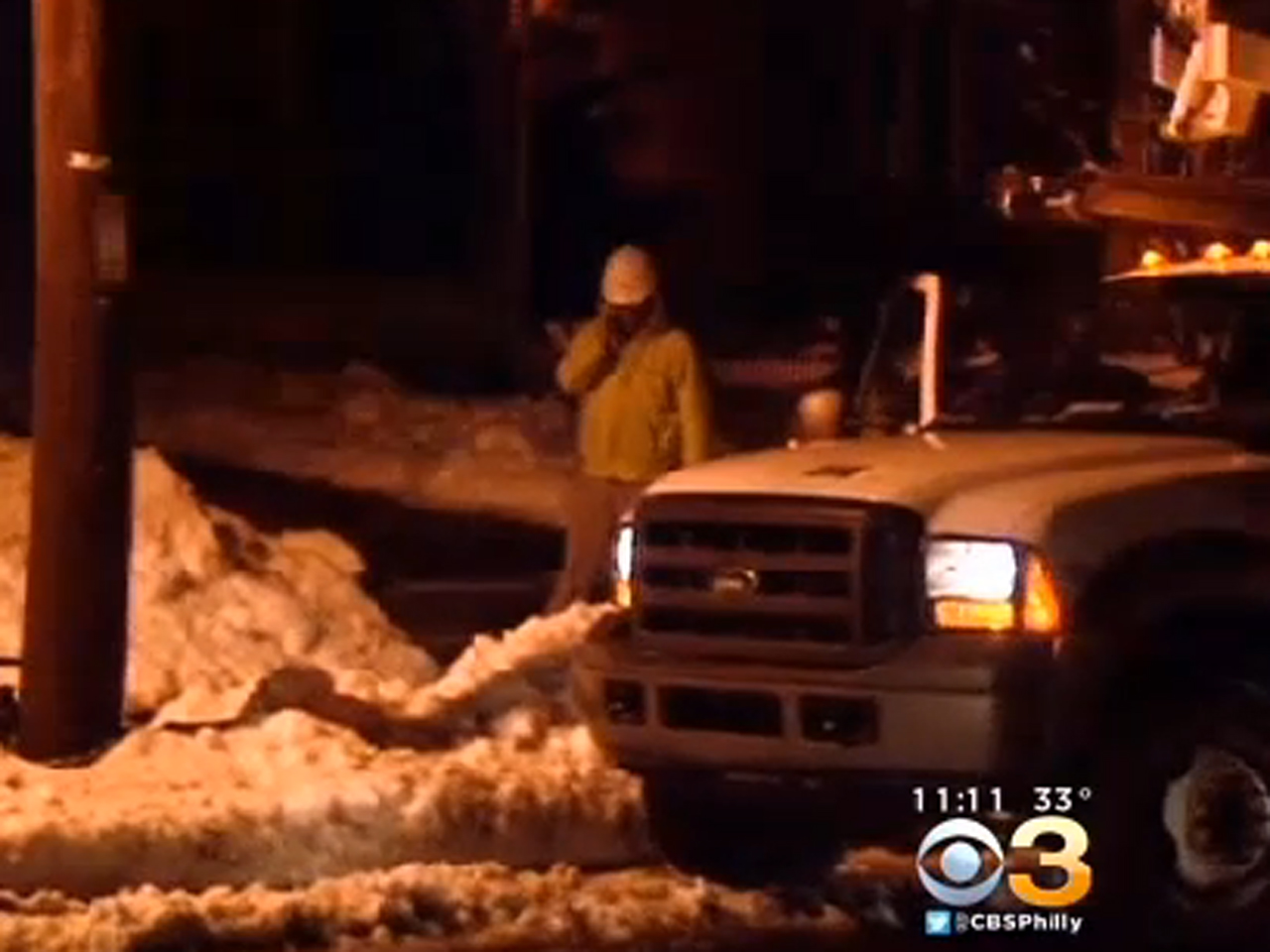 PHILADELPHIA -- Dave Dixon and his wife are bunking with friends after losing power in a snow-and-ice storm that caused more than a million U.S. outages - the vast majority of them in a single state, Pennsylvania.

The storm has long since cleared out, but its effects are expected to linger for days as utility crews work feverishly to restore power to hundreds of thousands of Pennsylvania residents left in the dark and cold. One official likened the damage to what you'd expect to see from a hurricane.

"People are going to have to have some patience at this point," Pennsylvania Gov. Tom Corbett said Wednesday, warning that an overnight refreeze could cause more problems on the roads Thursday.

U.S. airlines canceled about 2,900 flights because of snow and freezing rain in the Northeast and the Midwest. Wednesday was the third consecutive day bad weather snarled air traffic.

Fliers should get a break Thursday with few flights expected to be affected by weather.

Most of Wednesday's canceled flights were from the New York-area airports, Boston, Chicago, Philadelphia and Washington. Regional airline Cape Air canceled more than 200 flights, including nearly every flight planned from airports in Massachusetts.

Corbett late Wednesday issued a disaster emergency proclamation, freeing up state agencies to use all available resources and personnel.

The Northeast's second winter storm of the week dumped more than a foot of snow in some states, forcing schools, businesses and government offices to close, snarling air travel and sending cars and trucks sliding on slippery roads and highways - an all-too-familiar litany of misery in a winter when the storms seem to be tripping over each other.

What made this one stand out - and caused all those outages - was the thick coating of ice it left on trees and power lines.

"The damage that we are seeing in the field with the number of trees down, not only on lines but blocking roads and more, presents a number of logistical issues," said Pennsylvania Public Utility Commission spokeswoman Jennifer Kocher. "This damage is very similar to what we see during hurricanes."

At its height, the storm knocked out power to nearly 849,000 customers in Pennsylvania, most of them in the counties around Philadelphia. Though sizeable, it's still less than the nearly 1.8 million that were left without power after Superstorm Sandy in 2012.

PECO, southeastern Pennsylvania's dominant utility, warned it could be until the weekend before the lights come back on for all of its 500,000 customers without power. In neighboring Maryland, where 125,000 customers were in the dark Wednesday, power companies gave an estimate of Friday. Tens of thousands of New Jersey residents also lacked electricity Wednesday.

Villanova University says it will be closed at least through Friday since it has no power – or heat, reports CBS Philadelphia station KYW-TV. "Unfortunately," the school said, "we are not able to get an estimate as to when power to the campus might be restored. This power outage also affects our ability to provide heat to campus buildings.” All campus residents who are able to travel safely were encouraged to head home.

While some homeowners fired up generators, others, like the Dixons, are relying on the generosity of others to power them through.

They planned to stay with their friends overnight Thursday - and possibly longer.

"If we wear out our welcome, we'll get a hotel," said Dixon, whose home in the Philadelphia suburbs went dark at 6 a.m. Wednesday.

In Wyncote, a town just north of Philadelphia, Hannah Reimer took to Facebook to ask for a kerosene heater and recommendations on where to buy the fuel.

"And it worked! Someone from my church, who has power, has a kerosene heater and my husband is picking it up now," she said Wednesday night.

Reimer and her husband then planned to pay it forward, inviting their neighbors to spend the night.

"Our neighbors don't have heat, either," she said. "Or a kerosene heater."

Thousands of utility workers descended on the Philadelphia suburbs to get the lights back on.

PECO said early Thursday that about 440,000 customers were still without power and that the sheer scope of the work made the going slow. It was the second-worst storm in PECO's history - eclipsed only by Hurricane Sandy in 2012 - with the utility reporting 623,000 outages at one point Wednesday.

"We know that this is going to take multiple days," PECO spokeswoman Cathy Engel Menendez said.

About 3,500 employees and contractors were working to restore power, while another 1,000 linemen from utilities as far as Chicago were expected to join the company's efforts, she said.

Several hospitals were running on backup generators. Most decided to cancel elective surgeries and out-patient testing.

Dr. John Kelly, chief of staff at Abington Memorial Hospital outside Philadelphia, one of the affected facilities, said critical staff needed for any emergencies would be staying overnight. He said the hospital had plenty of fuel and food.

"We've been told to be prepared for four to six days. We are gathering staff and volunteers for up to a week," said Red Cross spokesman Dave Schrader.