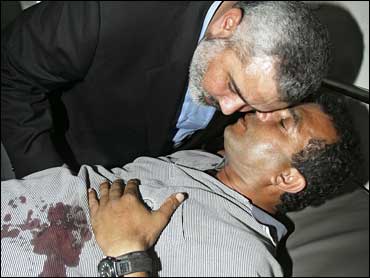 The ruling Hamas group fired a barrage of homemade rockets at Israel on Saturday, hours after calling off a truce with Israel in anger over an artillery attack that killed seven civilians in Gaza.

The Hamas militants' announcement to call off the cease-fire, reached in February 2005, raised the prospect of a renewed campaign of deadly suicide bombings and a wave of bloodshed.

Hamas claimed responsibility for launching at least 15 of the rockets fired after midnight, as well as a barrage of mortar bombs. The attacks caused no casualties, and the Israeli army said nearly all of the rounds appeared to have landed inside Gaza.

"The earthquake in the Zionist towns will start again and the aggressors will have no choice but to prepare their coffins or their luggage," the Hamas militants said in a leaflet. "The resistance groups ... will choose the proper place and time for the tough, strong and unique response."

Israel's artillery attack on Friday was part of a wider aerial and artillery bombardment of suspected Palestinian rocket-launching sites that killed a total of 10 people, three of them militants.

Friday's artillery attack tore into a beachside picnic in Gaza, killing seven civilians, and leading Palestinian President Mahmoud Abbas to condemn the attack as a "genocidal crime." He called for international intervention and declared a three-day period of mourning.

His rival, Prime Minister Ismail Haniyeh of Hamas, said the shelling was a "war crime" and urged an end to recent fighting between Hamas and Abbas' moderate Fatah movement.

Later, the top general in the Gaza Strip got caught in the crossfire of a Hamas-Fatah gunbattle on Saturday while he was attending the officer's funeral.

The convoy of Rashid Abu Shbak, Abbas' top security chief in Gaza, was driving through the funeral procession when the gunfight erupted between Hamas gunmen and Palestinian Preventive Security officers. No casualties were immediately reported in the fighting.

The force, loyal to Abbas and Fatah, accused Hamas of the killing and vowed to "stop Hamas' game whatever the price."

Furious over the killing of Maj. Bassam Qutub, Fatah boycotted on Saturday a meeting with Haniyeh. The meeting was aimed at calming the tensions between the groups, but Fatah spokesman, Tawfiq Abu Khoussa, said Hamas had committed a "number of violations" in recent days, including killing Qutub.

In Beit Lahiya, thousands of Palestinians gathered to attend the funeral procession of the seven people killed by Israel on Friday.

Chanting "revenge, revenge" and "destroy Israel, destroy America," the mourners made their way through the town's narrow streets to the families' homes, where weeping women tried to touch the bodies of the dead.

Abbas declared Saturday he would hold a referendum on July 26 on the establishment of a Palestinian state alongside Israel.

He made the declaration despite pleas by Hamas to hold off on the vote and rising tensions in the area. Abbas is expected to have a clear majority in support of the establishment of a state alongside Israel.

Israel said its attacks were aimed at areas that Palestinian militants used to fire homemade rockets at Israel.

"Harming innocent civilians is of course totally unacceptable and we will do whatever we can to avoid civilian loss of life," said Israeli Foreign Ministry spokesman Mark Regev.

"I express deep regret over the fact that uninvolved persons have been hit," Galant told reporters.

Kamal Ghobn said he had just arrived at the beach on a bus with about 50 relatives when the attack took place. "I was still parking the bus and everyone got out to go to the beach. As I locked the door I felt the thud of the shells and felt a sting in my side," said Ghobn, who was slightly wounded by shrapnel. Ghobn said he saw four shells land.

A sobbing girl lay in the sand, crying for her father. "Father! Father!" she screamed.

The body of a man lay motionless in the sand nearby.

Palestinian officials said seven people were killed and more than 30 wounded at the beach. Hardest hit was the Ghalia family, which lost six members, among them the father, one of his two wives, an infant boy and an 18-month-old girl.

"This was his first day at the beach this summer. He was taking his kids to play. It's destiny," said Nasreen Ghalia, the dead father's sister-in-law.

In an Israeli airstrike elsewhere in northern Gaza, three militants were killed after they fired a rocket into Israel.

Haniyeh sent a letter to Abbas on Friday urging him not to hold the vote and to continue negotiations over the plan. He said the referendum would divide the Palestinian people and instead proposed forming a unity government with Fatah. Hamas, which is sworn to Israel's destruction, wants changes in the language of the proposal.