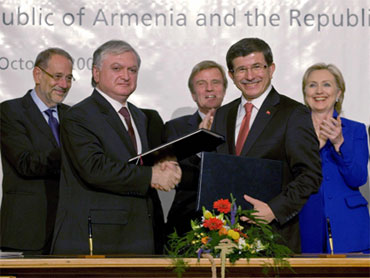 U.S. Secretary of State Hilary Rodham Clinton and Swiss mediators intervened Saturday to salvage an accord establishing diplomatic relations between Turkey and Armenia after a century of enmity.

The Turkish and Armenian foreign ministers signed the agreement in Zurich, after a last-minute dispute over the final statements they would make sparked a delay.

The accord is expected to win ratification from both nations' parliaments and could lead to a reopening of their border that has been closed for 16 years.

But nationalists on both sides are still seeking to derail implementation of the deal.

Major countries, however, expressed their support for the accord, with the foreign ministers of the United States, Russia, France and the European Union in the room to watch the signing.

Diplomats said the Armenians were concerned about wording in the Turkish statement that was to be made after the signing ceremony. Clinton abruptly returned to her hotel when the problems emerged, and engaged in discussions with representatives from the two countries.

"She's involved in working out an agreeable text," said a senior U.S. State Department official. "She's talking with the Armenian foreign minister, and she had a long talk with the Turkish foreign minister."

Clinton and the Armenian delegation finally arrived at the signing ceremony about 90 minutes after it was supposed to begin.

The contentious issue of whether the deaths of Armenians during the final days of the Ottoman Empire amounted to genocide is only hinted at in the agreement, which calls for diplomatic ties for the first time and the opening of the border within two months.

The agreement calls for a panel to discuss "the historical dimension" of the killing of an estimated 1.5 million Armenians during World War I. The discussion is to include "an impartial scientific examination of the historical records and archives to define existing problems and formulate recommendations."

That clause is viewed as a concession to Turkey, because Armenia has said that genocide was confirmed by international historians and further discussion could lead to deadlock.

Turkey denies genocide, contending the toll is inflated and that those killed were victims of civil war.

"There is no alternative to the establishment of the relations with Turkey without any precondition," said Sarkisian. "It is the dictate of the time."

Better ties between Turkey, a regional heavyweight, and poor, landlocked Armenia are a priority for President Barack Obama. They could help reduce tensions in the troubled Caucasus region and facilitate its growing role as a corridor for energy supplies bound for the West.

Javier Solana, the EU's foreign policy chief, thanked Turkey, which is a candidate for EU membership.

"This is an important cooperation, no doubt, of Turkey to solve one issue that pertains to a region which is in our neighborhood," Solana told AP Television News after arriving in Zurich.

Switzerland, which mediated six weeks of talks between Turkey and Armenia to reach the accord, is hosting the signing.

(CBS)
Another source of dispute is Nagorno-Karabakh, an enclave in Azerbaijan that is occupied by Armenian troops. Turks have close cultural and linguistic ties with Azerbaijan, which is pressing Turkey for help in recovering its land. Turkey shut its border with Armenia to protest the Armenian invasion of Nagorno-Karabakh in 1993.

Turkey wants Armenia to withdraw some troops from the enclave area to show goodwill and speed the opening of their joint border, but Armenia has yet to agree, said Omer Taspinar, Turkey project director at the Brookings Institution in Washington.

"We may end up in a kind of awkward situation where there are diplomatic relations, but the border is still closed," Taspinar said.

A U.S. official, who spoke on condition of anonymity because the agreement doesn't directly involve the United States, noted that President Barack Obama spoke to Armenian President Serge Sarkisian to reaffirm his support for the normalization process.

Turkish Prime Minister Recep Tayyip Erdogan said Turkey was taking steps with "goodwill" to restore ties with Armenia but that it was keen on seeing Armenian troops withdrawn from Nagorno-Karabakh.

"We are trying to boost our relations with Armenia in a way that will cause no hard feelings for Azerbaijan," Erdogan told reporters in Turkey.

Erdogan said Turkey's relations with Armenia after the agreement is signed Saturday will run parallel to the resolution of the Nagorno-Karabakh conflict. 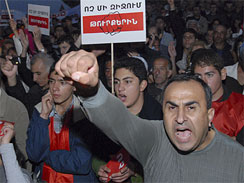 (AP/Tigran Tadevosyan, Photolure)
Necati Cetinkaya, a deputy chairman of Turkey's ruling Justice and Development Party, defended the deal, saying "sincere steps that are being taken will benefit Turkey." He said Turkey is aiming to form friendly ties with all its neighbors and could benefit from trade with Armenia.

(Left: Demonstrators holding placards reading "No concessions to Turks" rally in the Armenian capital of Yerevan, Friday, Oct. 9, 2009. About 10,000 protesters rallied against the planned signing of a deal to normalize ties with neighboring Turkey.)

But Yilmaz Ates of the main opposition Republican People's Party said Turkey should avoid any concessions.

"If Armenia wants to repair relations ... then it should end occupation of Nagorno-Karabakh, that's it," Ates said Saturday.

About 10,000 protesters rallied Friday in Armenia's capital to oppose the signing, and a tour of Armenian communities by Sarkisian sparked protests in Lebanon and France, with demonstrators in Paris shouting "Traitor!"